The Lords of Salem 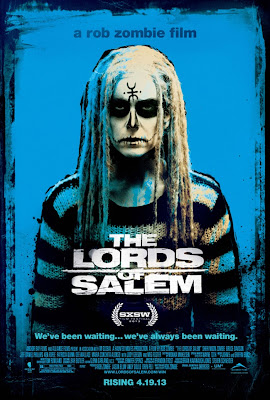 I feel like I need to post something since it's been a few months since my last. Sorry everyone, just haven't been feelin' it lately. Been more in tune with watching tons of stuff, but hadn't had the need to sit down and write anything down.

But there have been a few recent releases that I feel need some some positive word of mouth, or some buzz since it seems they are not receiving their due diligence. So anyway, here's my first of a few.

The Lords of Salem:

I think there might be a misconception with this one. I think that if people knew right off the bat that this wasn't a straight up horror film, then maybe some people wouldn't have gotten so upset, especially when you take into consideration Zombie has been known to make films a certain kind of way, with a specific tone. Here he tries something drastically different, and you know what? It fuckin' works for me.

The Lords of Salem is a moody, atmospheric, dark, brooding and epic surrealistic film. This is not a horror film. Here Zombie makes a film of this type the way Roeg, Kubrick and Polanski would, just to name a few. And much like his earlier films and their particular influences, these visionary filmmakers footprints can be seen all over Lords of Salem. And I will say, for the most part, he succeeds. I was so impressed visually and tonally with this film that all my little issues with the films shortcomings took a backseat to my excitement of this experiment in surreal filmmaking. And I have to give props to Zombie for attempting to do something like this and for the most part, pulling it off. It takes a lot of balls and not a lot of directors would ever even try.

Now, even I knew as I was watching this that this will turn a lot of people off and would more than likely "not" be a hit. Especially if you're used to Zombie's particular brand of Grindhouse filmmaking with shaky handheld camerawork galore. With LoS, I was surprised, no shocked, at how amazing this looked. Not one single handheld shaky-cam shot in the entire film. Everything looks meticulously designed and executed and his use of widescreen in this film is just simply stunning. Stylistically, this is Rob Zombie's crowning achievement; his growth as a mature filmmaker and if nothing else, a respected one.

I've never been a fan of Sheri Moon Zombie. I don't know, she just kind of gets on my nerves. I know it's really the characters she plays in her husbands films, but she annoys me in all of them, but in the back of my mind I know it's the character, and not the actress. Maybe it's the annoying baby voice she uses? I don't know. I just cringe when I hear her talk in House of 1,000 Corpses and The Devils Rejects. But anyway, here I was pleasantly surprised that Holy Hell, she can act! Yes, Sheri Moon Zombie can act. I still think this would have been a much stronger film had her lead role been cast with a seasoned pro, but she was not bad in the least and she certainly didn't "hurt" the film. But Jesus Christ, Mr. Zombie must you keep forcing us to stare at your wife's bare ass repeatedly?? It almost gets laughable, especially with the last scene of her bare ass in this film.......for no apparent reason whatsoever.......just to show her ass.

As in all his films, he litters this film with cult film icons. So much so that he ended up having to cut a good chunk of them out, and so if you've seen images of some of them online or in advertisements, there's a good chance you won't see them in the actual film. Like Zombie regular Sid Haig for one. His role was cut down so much that you only see him for about 2 seconds, but you won't even know it's him as you don't see his face. Bummer. And if you keep reading all things Lords of Salem, you'll find out about all the other cult film regulars that ended up on the cutting room floor.
Aside from those, the regulars here are just outstanding. One in particular just blew me away, because I had no idea it was her until I saw the credits at the end. Meg Foster. "The" Meg Foster was in here and I had absolutely no clue it was her. Wow!

Overall, a great surreal, dark and atmospheric film. I loved this one. So much so that I've been itching to go see it again. So much so that I will actually buy the DVD when it comes out in a further attempt to support this film, as I did when I actually bought a ticket to see it in the theater, which I just never do anymore because ticket prices are too outrageous for my taste. But I did it for this film and I'm glad I did. It was worth it.
The first half is pretty slow, but the tone and extreme eye candy of the second more than make up for it in the second half. It's a long one, but if you're invested, and know what type of film you're getting yourself into, then you'll surely not even care.

Posted by robotGEEK at 2:27 PM