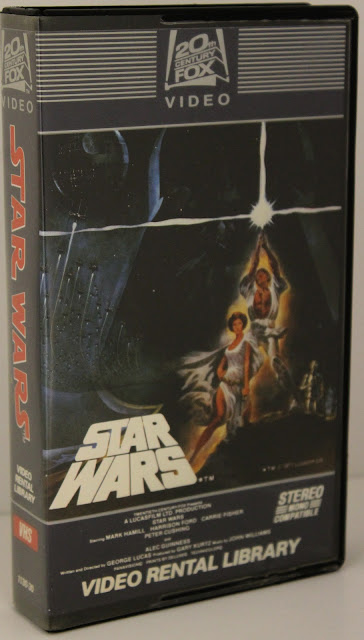 I knew if I was patient, I'd come across one of these for a decent price.

This was the very first "ever" VHS release of Star Wars. Released in 1982, this was released only to libraries for rental as stated on the front cover, spine and back cover. Later that same year they eventually released the first "retail" version in a cardboard "drawer case" edition, which you can find here.

So now I'm a very happy man. Not only do I now possess the first VHS retail edition of Star Wars, but I can now add the very first ever Star Wars VHS release. It's not terribly rare, depending on when you scour eBay for it. But depending on the condition, you can expect to pay a pretty steep price just based solely on what I've seen seller ask for it just this past year alone. Average it runs for about $40-$50, but I've seen it go for up to $100. What I paid for is nowhere near those figures, which is awesome considering this is in near mint condition.

This on top of the very nice package of German Big Box VHS tapes my good buddy Ingo sent me that I also received recently makes me a very happy man indeed. Expect those badass VHS tapes to be posted soon.
Posted by robotGEEK at 9:19 PM