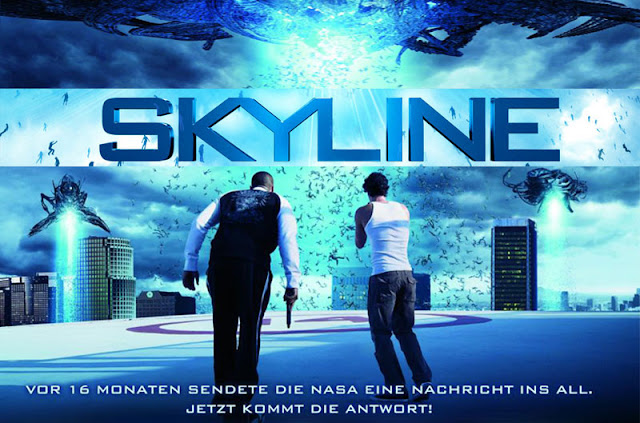 I might be in the minority with this, and maybe even get a little flack, but despite "not" wanting to like it, or rather just "thinking" that I wouldn't like it, hell or high water I actually quite enjoyed this one. I love alien invasion films. And if they're done right, not necessarily with logic or story, but rather balls to the walls action and effects filled with aliens and spaceships destroying entire cities and it looks good, well I'm all over that and Skyline is no exception.

But let me not get ahead of myself here. For a film that wants to be a summer blockbuster type film, one of the biggest problems Skyline suffers from is that there is not one single likable character here, not one. And the Strause brothers do the same thing every wannabe hotshot filmmaker does and casts young good looking actors who look like they came right outta some teen show, and wouldn't ya know it, they all do. Every single one of them. And that's where a lot of the disbelief comes in, not just with Skyline but pretty much with any new horror film in general. They star actors who just don't look like the average person and you just don't buy anything. I mean, look at Independence Day for example, where the main characters are played by "seasoned" actors like Randy Quaid, Jeff Goldblum, Bill Pullman, Will Smith and Vivica A. Fox. Ok, scratch those last two out, but with the others, that's what an average person looks like and that's what sells a situation. But anyway, I'm getting off track here.

Jarrod and his girlfriend travel to Los Angeles to meet up with his old buddy Terry, who's now a successful business man. That night Terry throws a party in his high rise apartment where he asks Jarrod to work for him, which in turn causes tension between Jarrod and his newly discovered pregnant girlfriend Elaine. That same night, when everyone's past out, blue lights start beaming from the sky, sucking people into the darkness causing panic and as the days go by, an alien invasion.

This is by no means a sci-fi masterpiece, game changer or even offers anything new to the alien invasion story. And you have to sit through about 30 to 45 minutes of unavoidable back story and character development, but if you can get past the lame first half, the second half is where the fun really kicks in and with an insane amount of special effects and even some cool dog fight action between the military and some alien ships. BOTTOM LINE. This is a pure and simple alien invasion story done well by two visual effects brothers who's only other big budget effort was AVPR: Requiem, which I've still never seen. Once the aliens arrive in full force, it's a pretty badass thrill ride for about an hour, even though you never know why they're here or where they came from. They're here, they abduct humans, but why? Who knows, and it's a minor detail that, since the film as a whole was pretty fun, I just don't really care about. Sure I ask myself the "why, who and how", but I'm not gonna let it ruin the entire film for me just because I don't know.

I've read a lot of negative stuff about this, and even the ending mainly, and while I see and can understand a lot of the gripes, I still feel it was made in such a way that I still had fun with it, even though I didn't like "any" of the characters. I think all the stuff I had read about it when it first hit theaters is what kept me away from it all this time, but when I recently caught it streaming on Netflix, I couldn't pass up the chance to finally see it and now I wish I had seen it at the theater. It had enough going for it in my opinion that had I seen on a big screen, it would've made an even bigger impression on me.

I think one of the main things I really dig about it as that, while obviously unintentional, it retains a B-Movie quality, but on a big Hollywood blockbuster budget. That's the same way I felt with Terminator 3: Rise of the Machines. It's a big film, with a massive budget, Arnold Schwarzenegger and top of the line effects. But there's just "something" about it, and I can't pinpoint exactly what, that makes it look and feel like a B-Movie. Watch it again and see what you think? But that's how I feel about Skyline, that despite it's visual impressiveness and monster effects, it's got a B-Movie "feel" that I just can't shake. And that's fine because whether they're on a minuscule or massive budget, if it's done right, I'll enjoy it.  I've seen too many "bad" and "shitty" movies lately to let this one fall into that category. This was fun, with a lot of action and insane effects work going on in the second half that I can completely forgive the annoying characters, stupidity of the actions of those annoying characters and lack of a reason why these aliens are even here. I also need to commend the directing brothers for not doing what every single new director does, which is the lazy as shit "handheld shaky cam and hyper kinetic editing" technique. That was such a fucking surprise and a blessing that you can actually tell what the hell is going on and they didn't resort to that type of lazy filmmaking to mask the fact that they had no visual talent. They actually "do" and make Skyline look pretty damn good.

So finally, let's talk about that ending, which is most peoples gripes with this. It was ............. different and unexpected for sure. But, at least in my opinion, not the horrible ending I was expecting after everything I had read about it. I actually found it pretty creative and in keeping with it's B-Movie vibe through and through. I liked it and when the screen went black after that last shot, you just know they didn't want you to take this film too seriously. I mean, how could you with that kind of ending?

I think if they had recast the actors to more believable looking human beings, and maybe marketed it a little less seriously as they had done when it came out, I think it would have done much more solid business than it ended up doing. It certainly deserves to and I don't feel it's the awful sci-fi flick it was made out to be.
Posted by robotGEEK at 10:23 PM

Email ThisBlogThis!Share to TwitterShare to FacebookShare to Pinterest
Labels: sci-fi, The Brothers Strause