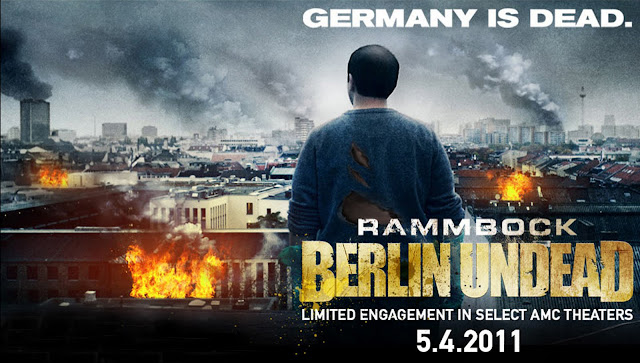 The best thing I can say about Rammbock: Berlin Undead is that it's a competently made zombie film. That's not to say that it's great or offers anything new to the zombie genre, but for a zombie film that runs a mere 60 minutes, it's not a bad way to spend an hour.

Michael (Michael Fuith) recently got dumped by his girlfriend Gabi. He misses her so much that when she asks for her apartment key back, he decided to travel all the way to Berlin just to give it to her in person, so that he can use it as an excuse to see her again. Only problem is that as soon as he arrives at her apartment in Berlin, a zombie virus has taken over and has started turning people into rabid crazy zombies. And to make matters worse, Gabi's not even home and he's stuck in the apartment with a young handyman's apprentice with an attitude problem named Harper (Theo Trebs). Together they must keep the raging horde of zombies from breaking into the apartment and at the same time, come up with a plan to escape to the river where Michael saw a boat without turning into zombies themselves.


The last really good zombie flick I've seen recently was the excellent The Horde from France, and this one just doesn't come close to the badassery displayed in that film. Here, the direction is uninspired, with handheld camera work being the predominant style, and there's not a single "Oh Shit!" moment to be found. And that's really what makes a good zombie film memorable, are the plenty "Oh Shit!" moments.

There were a couple of aspects I did like about this though. The first being the casting of Michael Fuith in the lead. He's a 35 year old who looks a lot older because of his receding hairline and just the constant look of dread on his face. He's overweight, short and not your average leading man material. But that's what I liked most about him, because he comes off so much more believable that way. Plus, he's a damn fine actor to boot. The second would be the last 15 minutes of the film. Not amazing or anything, but a helluva lot better than the rest of the film and an ending I honestly didn't see coming. So kudos to them for pulling that off in an otherwise stale and average zombie film. Third and lastly, the makeup effects and decent amount of gore helped tremendously too. It showed that the film did in fact carry a decent budget and it was all the better for it.

Like I said, you could do worse trying to waste an hour of your time. Definitely not the kind of film that's going to stick with you when it's all over, but a decently made effort with a better name than the film deserves.
Posted by robotGEEK at 4:46 PM