Decade of Disaster: The Towering Inferno (1974) 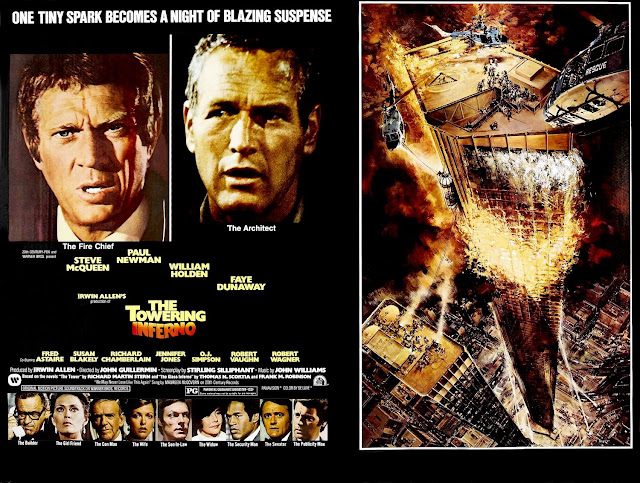 It's funny how things will suddenly send you down a rabbit hole. It suddenly struck me that I don't think I'd ever seen a Steve McQueen film before, so when I watched The Hunter (you can find my review a few posts back) for the first time a few weeks back, it got me digging through his filmography to see what other films he had done. Of course we all know the big popular titles like The Great Escape and The Magnificent Seven, but the one that stood out to me was The Towering Inferno. I love 70's Cinema. Mix that with a disaster flick with an all-star cast and I was pretty sure I was in for a good time. So it was a no-brainer for me. Towering Inferno it is.

Every time I watch an epic 70's film, I'm almost always impressed. It was such a special time in cinema for a number of reasons, but to me, it's an era of filmmaking that I absolutely adore. I loved the scope of everything. I admire the intense practical effects work that went into films like this, the gorgeous widescreen cinematography, and the lovely yellow/brown/orange color scheme prevalent in nearly all of their set designs. Blah, blah, blah. Sorry. I'm getting off track.

Released in the middle of the Disaster craze of the 70's, The Towering Inferno is a film that was much better than I anticipate going in. While I was certainly expecting a good time, I wasn't expecting for this to be as good as it was on both an entertainment level, and on a technical one. Man, if you walk away from this film with anything, it's the appreciation that went into all the work that went into practical effects and sets. It's really kind of mindblowing, because we've been somewhat desentasized these days that pretty much anything can be achieved through the magic of CGI, whether it looks good or not. If you can dream it up, it can be realized on the big or small screen. But you can still always tell that it's CGI, no matter how hard they work and try to make it look real. It just never does. So when you see something like this, it just kind of blows your mind and at least for people like myself, makes me miss those days of practical sets, pyrotechnics and stuntwork.

I learned that this comes to us courtesy of 2 directors, mega-producer Irwin Allen, who directed the stunts and action sequences, and John Guillermin, who directed the non-action sequences. Guillermin is the genius responsible for the live action King Kong from 1976, my personal favorite Kong film to date, and another wonderful old school epic that utilizes amazing old school effects work with an impressive star-studded cast of somewhat then-unknown actors like Jeff Bridges, Charles Grodin, Jessica Lang and a whole lot of familiar faces.

As I mentioned earlier, we are huge fans of 70's cinema and design. Any chance we get to check out a film from this decade, we are always down, and one of the things we love most about these films from that era is the set design, and The Towering Inferno is no exception. The color schemes (full of orange, yellow and brown), and the slick mod design to everything gives it all such an extra punch of awesome. 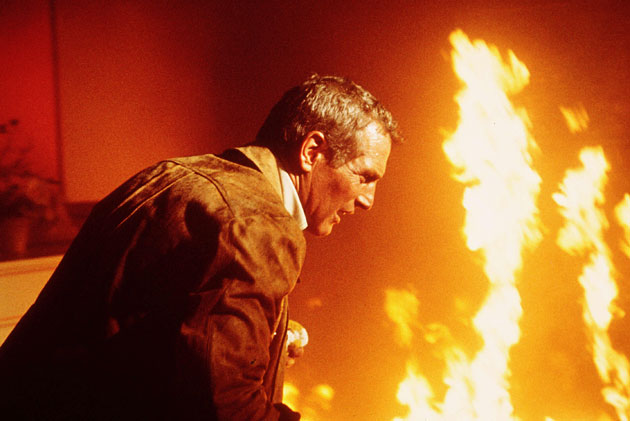 It's no surprise to learn that this set was not without it's conflicts. I mean, this cast is highly impressive, and there were sure to be some diva-like behavior abound.....and a whole lot of complaining from nearly everyone involved. A quick IMDB search will give you all the details, but it's a juicy read for sure, if not surprising. I will add though that everyone was on top of their game. McQueen was pitch perfect as the no-nonsense heroic fire captain, and Newman was surprisingly restrained, but effectively in charge. I never noticed before, but he reminded me a whole lot of Rutger Hauer here. The way he talks, acts, mannerisms and even the way he looks!

At nearly 3 hours long, The Towering Inferno never feels like it. It moves along briskly, with barely a moment to spare. It's a brilliant class act - towering achievement in old school epic filmmaking with an all-star cast, incredible effects and a wonderful way to spend a Sunday afternoon.

There are multiple platforms where you can either rent or buy it digitally, but you can purchase the blu ray pretty cheap too. I picked mine up for roughly around $10 used, and it's a great addition to my collection, because it's one I know I will revisit often.
Posted by robotGEEK at 12:35 PM