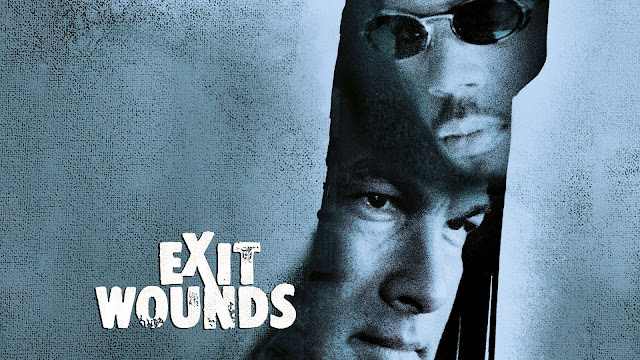 Having only ever seen this maybe once before, I was excited to go back to it because I remember it actually being pretty good, which isn't all that surprising if it weren't for the fact that he had 2 duds with Fire Down Below and The Patriot, preceding this release, even taking a 3 year break before coming back to this one. When you consider the fact that he typically releases anywhere from 2-6 films a year, this 3 year hiatus was a big deal. Anyway, moving on.

Produced by legendary action maestro Joel Silver, who made Seagal lose weight for the role, and directed by cinematographer (Speed, Falling Down) turned director Andrzej Bartkowiak (Romeo Must Die, Doom), Exit Wounds comes to us courtesy of his On Deadly Ground screenwriter Ed Horowitz as co-writer, along with Richard D'Ovidio (Thir13en Ghosts). And guess what? It's a surprisingly badass actioner that showcases many of the qualities we grew to love about early Seagal flicks in the first place.

Having slimmed down for the role, and having cut his trademark ponytail, Seagal swaggers his way into an eclectic cast that includes DMX, Isaiah Washington, Bill Duke, Michael Jai White, Anthony Anderson, Tom Arnold, Bruce McGill, and Jill Hennessy. He seems a bit less cocky this time around (perhaps the 2 previous misfires humbled him a bit), and with the help of some fancy wire work, we get to see him actually perform "some" of his own fighting, which is kind of a big deal considering his legacy will go down as having used laughably inaccurate stunt-doubles for even the most mundane fighting. Don't worry though. There are still plenty of noticeable stunt-doubles for him in here; they're just not as hilarious as they've since become. But moving on. Seagal carries himself extremely well in here, surrounded by an insanely talented supporting cast in a story that moves along briskly, full of big-budget action set pieces filled with impressive stuntwork, a whole lot of fighting, and a fun vibe that permeates throughout it's short 101 minute running time. To put it frankly, Exit Wounds is one of Seagal's better films from his entire filmography, and might even be his last really great action flick.

In fact, aside from it being far better than I expected, there were quite a number of things that surprised me with this. Seeing Seagal actually do some fighting for one, or that the director had previously worked on some big budget films as a cinematographer, or that Seagal himself looked halfway decent. Sure he wasn't as thin as he was in Under Siege 2, but he looks a helluva lot better than he did in some of his films following this. Even his ridiculous toupee is barely noticeable here, where he keeps his hair a natural color instead of that fake gawd-awful jet black he uses now. But the biggest surprise for me was how good DMX was in this. For a guy who can't seem to stay out of trouble, he's a surprisingly good and confident actor, even when it comes down to not saying a word, but conveying emotion effectively through a facial expression. Hell, he even gets to throw down a few times with Seagal and holds his own. It's a shame he couldn't get his shit together, because he could very well have turned out to be one of the better rapper-turned-actor's out there. 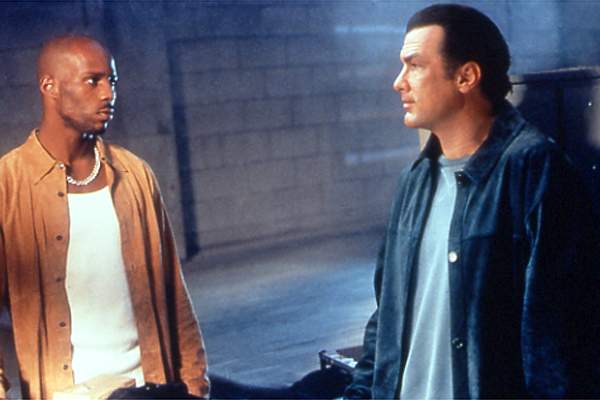 Director Andrzej Bartkowiak handles the action well enough, but oftentimes turns to crazy Dutch-angle handheld camerawork a bit too often for my personal taste during the fights. Still, it's in the other moments of the film where he keeps a steady hand and gives the film a sleek polished look, which really helps the film a lot overall in looking like a classic big budget Joel Silver action film.

Ultimately, when you consider that most of his films that followed (and we're going on almost 20 years now) are crap, Exit Wounds begins to look more and more like Seagal's last hurrah in big budget quality action films that actually hit theaters. While Half Past Dead is technically his last theatrical release, that film was pretty awful from what I can remember. Exit Wounds is different. It's actually good, fun and delivers the action goods on a remarkable breakneck pace. It's a shame Seagal didn't stick with Joel Silver. It seems like he is exactly the force/influence he needed to keep him in check.
Posted by robotGEEK at 11:00 AM