We have been on an 80's horror kick of late, and I've taken the opportunity to "finally" seek out a lot of horror films that I never got around to watching from that era. I have to be honest, it's a pretty long list. Considering I grew up on this stuff as a teenager in the 80's, there really is no excuse on my part. But hey, better late than never right?

We had been debating between Slaughter High and Cheerleader Camp for our 80's horror fix one recent Saturday night, with this one winning out, and I'm so glad it did. I have to say, Slaughter High was just the thing we needed, and it was more enjoyable than I was expecting.

It's very basic stuff about a nerd who gets relentlessly teased during high school, who exacts his revenge during a reunion. We've seen it before, and there's nothing new brought to the table, but there's just so much spirit in this one, and so much cheese that it all comes together so well. For example, while these actors are supposed to be high school age, they're clearly in their 30's, at least. And there are so many technical goofs to laugh at that I don't even know where to start. But hey, it's what makes the experience fun, especially in this one, not to mention the many WTF? moments filled to the brim with stupid characters making the stupidest, weirdest, or plain questionable choices.

The cast is quite large for an ensemble group, and each of them seem to display a rather odd way of delivering their lines. I don't know if that was intentional, or if they were just terrible actors, but again, it adds that odd bit of spice to the  mix of an already thoroughly enjoyable 80's cheese dish. Some digging turned up some interesting info on this. Most of the actors are British, as this, to my surprise, is a British production, with only a few American actors thrown in from an acting class over there. Speaking of the actors, I was shocked and pleasantly surprised to see Caroline Munro (Star Crash, Maniac) as the lead in this. For some reason, it just seems like an odd choice for someone of Munro's stature, to be in an 80's horror cheese-fest. 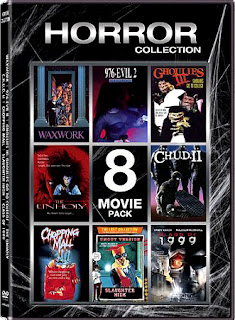 One of the best things Slaughter High has going for it is it's rather impressive effects work. While it's not filled to the brim with guts and gore, the scenes that do have practical effects work and gore are surprisingly badass. There's this one sequence in particular involving a bed that was damn impressive. Even some of the kills were delightfully original.

Another special thing to note, and trust me, it will be completely obvious once you watch this, is that Harry Manfredini scored this. He just so happened to also score Friday the 13th, and let me tell you, it's a near identical score here. It's kind of funny.

It's no masterpiece, but one helluva good time in the 80's horror cheese department. Mine came in a
cheap 8 Horror Film DVD pack for $5, which you can pick up at your local Wal-Mart or Dollar Store here in the states. It's totally worth the purchase, because aside from Slaughter, you also get a lot of other gems like Class of 1999, Waxwork, Chopping Mall and C.H.U.D. II to name a few. The only real issue being as that all of them come in a dreaded full frame aspect ratio. But when you consider watching these on VHS would produce the same results, then this isn't a bad deal at all.

Some internet digging shows that this did get a DVD release here in the states in 2009 as part of a "Lost Collection", claiming to be Uncut as well, which you can get pretty cheap. Unfortunately it's also in full frame, and the transfer doesn't seem to be any better than the one on this 8 Pack, so I'd just grab this one. It's the cheapest option for the same quality and you get a ton of other great films to boot. If you're a serious collector, you can pick up Arrow Films 2011 UK DVD release that is in widescreen, region-free and also uncut. I'm not sure about it's availability though.
Posted by robotGEEK at 1:25 PM