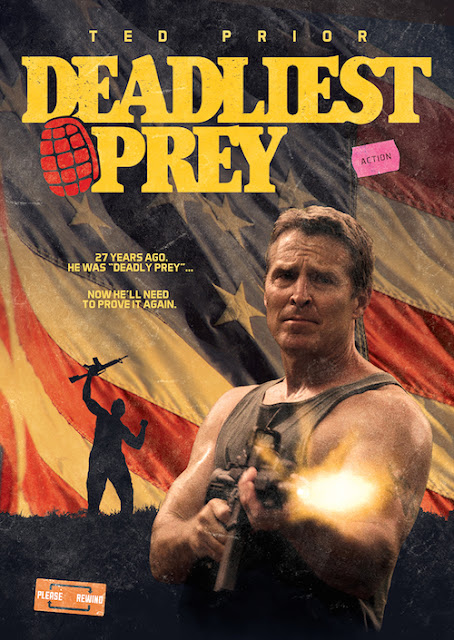 2013
Directed by: David A. Prior
Category: Action

When I heard that this sequel to Deadly Prey was coming out, I was only barely dipping my toes into writer/director David A. Prior and actor/brother Ted's immense DTV output. So I wasn't really all that intrigued as I had yet to actually see the first one. Considered a bonafide cult classic and one of the best Bad Movies ever made, the first film, Deadly Prey, did everything right in creating a truly enjoyable Bad Movie Night experience. While it's safe to say that the resulting entertainment value and laughs were not on purpose, surely the brothers reveled in the popularity, allowing them to continue making many, many more films in the next few decades.

After finally watching Deadly Prey, I got it. I understood the cult status and it instantly became a favorite. So much so that I decided to seek out writer/director David A. Prior's vast library of low-budget films. While some are easier to find than others, some of these are entertainingly bad cult gems, while others are just plain terrible. So we went into the sequel with some apprehension, knowing full well that it could go either way.

* Slight Spoilers Ahead:
I'm happy to report that this sequel DOES NOT disappoint. Quite frankly, Deadliest Prey proudly lives up to the low-budget insanity of the first film. Though it did take a little while for things to get rolling, once it did it's pretty much a constant love letter to the first film in every way possible. So much so in fact that you can almost say it's really an updated remake, in an odd way. It predictably hit all the same exact notes as the first film, and to my surprise, even brought back most of the original key players. And I can't state that enough, Deadliest Prey was a constant surprise in the best ways possible. While it was surreal seeing an older and much slower Ted Prior without the mullet and jean shorts, he does a fantastic job resuming the responsibilities of the "kidnapped warrior single-handedly killing everyone who crosses his path in the forest". Has anyone else ever noticed that he's a dead ringer for Christian Bale? Or is that just me?

One thing is for certain. 3 decades of filmmaking has not made David A. Prior a better director, which quite honestly, is a good thing if you ask me. Deadliest Prey could easily have gone the other way, and in doing so, it would not have been half as entertaining. And that's probably what worried me the most going into this, knowing it was the same writer/director and worried that his skills had sharpened somewhat in the 27 years since the first one. Gladly, they haven't, because that's what makes Prior films so goddamn entertaining. The writing, acting, camerawork, editing; it's all "still" so amateurish that you can't help but laugh and fall in love with this team all over again. This is exactly the sort of sequel Samurai Cop deserved, but sadly failed at. That director was already terrible, and for some strange reason tried harder at being terrible for the sole purpose of delivering a sequel worthy of it's predecessor. And it failed.....miserably. It was a blasphemy to the legacy of Samurai Cop. Thankfully, this film does not suffer the same fate. Prior delivers the goods as an incompetent and amateurish filmmaker. He doesn't have to try, he just is, and I don't mean that in any negative way. Quite the opposite. It's what makes him so great and I'm sad that he's left us and we won't be getting anymore gems from his genius. At least we got one last GREAT film out of him before he left us.

Deadliest Prey easily will fix your Bad Movie Night craving, even better as a double-bill with the first film. If you were ever wondering whether this was any good, lived up to the original, or was worth a purchase, I'm here to tell you YES!
Posted by robotGEEK at 12:49 PM