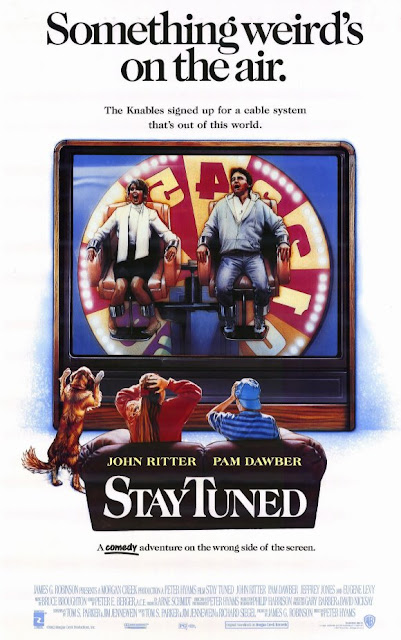 I've said it before, and I'll say it again. Peter Hyams is one of my all-time favorite directors and he's so criminally underrated as a quality filmmaker. I don't even think most people give him the credit he deserves or even know who the hell he is or what he's done. He's dipped his hand in nearly every single genre from drama, comedy, action, sci-fi, thriller, and even martial arts, yet most people "still" do not recognize his name. It's a travesty really, so real quick, let me refresh your memory or fill you in on some of his incredible output in the last 3 decades. Some of his best films include the incredible Outland (a personal favorite), as well as Running Scared, 2010: The Year We Make Contact, The Presideo, Sudden Death, Timecop, Narrow Margin, and this little seen and completely underrated gem. Sandwiched between the 1990 thriller Narrow Margins and 1994's Timecop with Van Damme, Hyams decided to return to comedy for the first time since 1986's Running Scared, and the results are an immediate cult classic.

The film revolves around an unhappily married couple going through the motions. The husband, John Ritter, is obsessed with television, a constant irritation for his wife, and when a door to door salesman randomly shows up at his house with a deal he just can't pass up for a brand new satellite dish, huge television, and 666 channels of shows you can't find anywhere else, he immediately jumps on it. Except, the salesman works for Satan, and the catch is that if you come  near the satellite dish, it sucks you into hell's television world and you have 24 hours to escape or else your trapped in television purgatory forever.

I have to be honest. I remember seeing this when it first hit VHS, and I don't think it had a theatrical release as far as I'm aware of. And I remember this being weird, fun and a total blast. But for some strange reason, I never thought to revisit it until now. And the only reason being that my local, and last remaining video store finally shut it's doors and was selling everything for cheap just a few weeks ago. So when I came across this, I immediately grabbed it and I'm so glad I did. Revisiting this was such a fun and incredible experience for me. All of Hyams trademark visuals are on full display, and John Ritter is just in top form here. The film possesses such a rare and fun charm that through it's visual eye candy, excellent casting, and "dated" time period, the film never skips a beat and is a total blast from start to finish.

One of the best things this film has going for it is it's genius in recreating some classic films and television shows, but with a devilish twist. I won't ruin them for you here because when you see them, you'll surely laugh and get a kick out of some of the genius in these. While most of them are only commercials, they're so well done and creative that your imagination will run wild with the ideas presented by these insane commercials.

Whenever I bring this film up, "everyone" says they love it so much. Yet, it doesn't really carry the kind of cult status it desperately deserves. I think it's time to really give this treasure the cult status it needs. Criminally underrated would be an understatement. This film is gold. If it's been a while since you've seen it, I implore you to seek it out. You'll surely have a helluva great time.

Currently it's available on DVD, VHS and to rent on Amazon. The last DVD release was I believe in 2005 in a snapcase edition, which is the one I have. It does come in widescreen and with a healthy dose of Special Features for an older release, but the DVD will run you anywhere from $20-$50 on the secondhand market. Because it's a Peter Hyams film, I would strongly urge you to go with the DVD rather than the VHS, only because his visuals beg to be seen in widescreen. Maybe in time, with enough demand, this will see a blu ray release soon.
Posted by robotGEEK at 9:27 AM