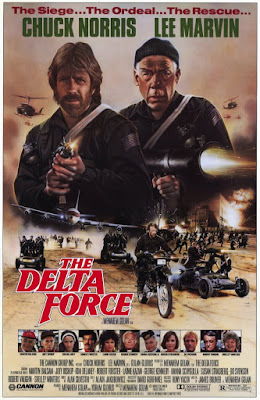 Like any teenager who grew up in the 80's loving action, of course I'd seen this. Hell, I had a video store poster hanging on my wall that I snagged from my local video store back in the day when they used to "give" them away. Now it's different of course. Now employees snag them themselves and sell them on eBay. But it was a different time back then. Anyway, I can't really recall why, but while I love 80's Chuck Norris, I never went back to revisit this particular film after that initial viewing as a kid. When I saw this on Netflix recently, and I was putting some new furniture together, I figured some good ol' 80's action would be nice to play in the background.

Delta Force surprised me from a number of different angles. First, it's really long, clocking in at 2 and a half hours. Second, shockingly, there's really not that much action in this thing. I'll get to that later. Third, the insanely large ensemble cast is really impressive. Fourth, this film is really dramatic, and for the first half of the film, kind of uncomfortable to watch. Lastly, Menahem Golan did a much better job directing this thing than he gets credit for. So let's dig in.

This is an unnecessarily long movie. The first entire hour is a drama, with zero action. Terrorists hijack a plane full of passengers and it's here where Delta Force surprised me the most. Mainly because I was expecting an action film, and instead was treated to a harrowing tale of survival aboard a plane held hostage by sadistic terrorists who have no qualms about torturing or killing on the spot. Though we're nearly 15 years after the events of 9/11, this film was still hard to watch, because it depicts events like what happened so long ago rather shockingly realistic and brutal. Of course this film was made over a decade before those events, but it's not any less uncomfortable to watch.

When the entire first hour consists of a hostage drama, I started to wonder if this was even an action film, because up to that point, I hadn't seen any. The action eventually comes around, at the 1 hour mark. It's sporadic, but it's there, eventually going full force in the last 30 minutes or so. Being an action fan, I was a little let down and more surprised than anything that for a film that pushes the action in it's advertising, there was very little in here. Though I will admit that the action that was here was done well.

The cast is damn near impressive. Sure you got Chuck, a severely underused Steve James (ain't that always the case?), legends Lee Marvin as Chuck's commander and Robert Forster as the main Lebanese bad guy, which he pulls off rather effectively. But the film is littered with numerous legends like George Kennedy, Martin Balsam, Lainie Kazan, Bo Svenson, Robert Vaughn, Shelley Winters and the list goes on and on. But the most fascinating thing I found about this, other than Robert Forster playing a Lebanese bad guy, is that Chuck doesn't make much of a presence until the second half of the film, The first half of the film focuses on the drama aboard the plane, the hijacking. The second half is Chuck coming in and kicking ass.

This film really does wear it's heart on it's sleeve. It's so overly dramatic in some areas, and overly cheesy in others. The film ultimately suffers because it forgets that its supposed to be an action film for well over an hour, and when the action finally does come around, you almost forgot it's supposed to be an action film. Yet it's oddly charming. It retains enough of what you expect when it's all said and done to keep you satisfied for the most part. One thing's for sure, you'll be humming the impossibly cheesy theme music for days afterwards.