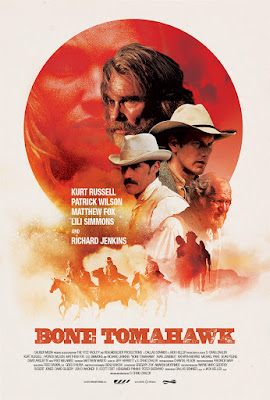 Up until a month ago, I hadn't even heard of this film. It seemed to literally come out of nowhere when a fellow filmgeek on Facebook posted a review of it from a random site. The title alone piqued my interest, so I did some digging and discovered it was some new horror/western film I'd never heard of before, starring Kurt Russell and written and directed by the guy who wrote the novel from which the film is based on. So yea, I'm sold. Fuck yea I am.

Released primarily on VOD a few weeks ago, Bone Tomahawk is a brave film, a film that if you had to categorize, you would be hard pressed to. If anything, it would most closely resemble the weird genre mix of Ravenous, but it's not like Ravenous in tone; Bone Tomahawk is it's own thing entirely. You could say it's mostly a western, but it's also clever and funny in a lot of the dialogue, yet then the film takes a huge detour and turns into something else entirely in the final act, something that would be considered a horror film set in the west.

Bone Tomahawk is unique to say the least, blending different genre's, ideas and themes into one mish-mash of a film that works so well you're pretty sure that had it had a theatrical run, it more than likely wouldn't do very well. How could it? How do you market a film like this? For those thinking it's a horror film, it might turn them off when they see that it's more of a western than anything. For those going in expecting a western, the abundance of gore and insane violence in the last act might shock them. Hell, it shocked even us seasoned gore hounds who didn't know what to expect.

I won't be including a synopsis on this one, because I went in cold, knowing nothing, and my experience was all the better for it. You should do the same. Just know that it's a western with some horror elements, that's oftentimes clever and funny, resulting in a wholly unique experience with some standout performances by Kurt Russell and Patrick Wilson, with a healthy dose of cameo's cult film fanatics will appreciate. Writer/Director/Author S. Craig Zahler does an outstanding job building tension, composing impressive shots, and getting the most out of his cast. I for one am looking forward to what he comes up with next.
Posted by robotGEEK at 9:57 AM