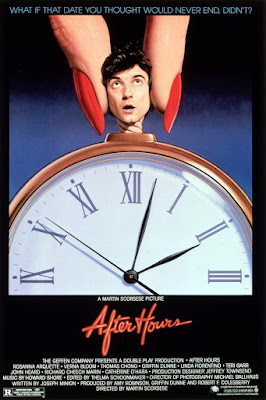 I don't know why, but for one reason or another, I never took the time to see this Scorsese cult classic. I guess I had known for a while he directed this, even though it's completely outside the realm of anything he typically does or is known for, but nothing about this film ever struck me as something I'd be interested in. It didn't help that this film is never mentioned.....ever. Not even when people are discussing Scorsese films. It's just kind of like the bastard child nobody ever mentions. Yet very sporadically, I'd come across the poster image. And still, nothing about that ever got me to get on IMDB or anything and look up what it was actually about, or to head on over to YouTube and check out the trailer. So I didn't, and man do I feel stupid now about that.

When I recently came across this title on a list of underrated gems from a respected website I follow, it was just the push I needed to finally get on the ball. Luckily for me, a friend of mine happily lent me his copy. On a recent Saturday night, the Mrs.'s and I poured ourselves a glass of wine, and proceeded to have our minds blown for the next hour and a half by a film that is unlike anything you'd expect, either for a black comedy or a film directed by Martin Scorsese.

Paul (Griffin Dunne) is a bored office worker. One night he meets a Marcy (Rosanna Arquette), a cute girl in a cafe. They quickly strike up a conversation centered around the Henry Miller book he's reading. When he decides to call her late that night, in the pretense of buying a piece of art from her roommate, but more hoping to see her again, little did he know that one single moment would lead him to a strange, dark, and unforgiving odyssey through downtown New York, and a journey that will change his life forever.

I can't stress enough how great Martin Scorsese's After Hours is. Not knowing what to expect going in, we were treated to a dark, surreal, nightmarish odyssey through the streets of New York circa the 1980's, all through Scorsese's brilliant eye. It's an odd and complicated movie to figure out. How much of it is reality and how much isn't is up to the viewer I gather, but all in all, After Hours is a surreal, oftentimes intense, sporadically darkly comical, daring and quirky piece of filmmaking that still surprises me that it was made in the 80's.
Before After Hours fell on his lap, Scorsese had recently seen his dream project Last Temptation of Christ fall apart, and he was left in a depression and wondering what he could do. This bizarre script by a first-time writer made it's way to him via his producing partner and he just knew he had to make it, cheaply, and going back to his indie roots. The success of this film was so great that he was finally able to in fact make Temptation a few years later.
Not everyone's cup of tea, and maybe too weird for the casual viewer, but a definite unique experience for film lovers. Also of important note, Scorsese won Best Director at Cannes that year for this, a fact I was completely unaware of. Had I known that, I know I would have gone to seek this out much sooner. After Hours is a weird journey, and we loved every second of it.

Posted by robotGEEK at 9:37 AM