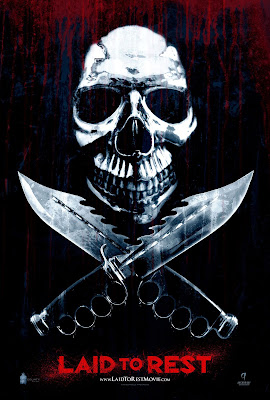 Lately, with planning my secret wedding and effectively pulling it off, I've take a few steps back from posting reviews because there's simply just no time. Now that the dust has settled and we can start breathing again, we've taken the opportunity to catch up on shows and films that have been piling up, but still, I haven't found myself running to the computer to write down my thoughts on them. I'm just enjoying the calm since I've missed it so much.

Last night was Friday the 13th, and because of that, we decided to screen a slasher for our movie crowd in honor of this rare date. When my wife and I sat down and tried to pick which Friday the 13th film we wanted to show, we realized that we had already shown the 2 best film in the series; Part 4: The Final Chapter & Part 6: Jason Lives, during past Friday the 13th honoring screenings. So we then decided to settle on a horror film, but not just any horror film. It had to be an old school style slasher in keeping with the Friday the 13th vibe. Doing some digging and research online we narrowed the choices down to Intruder and Laid to Rest. I've already seen Intruder and love it, but when I did some research on Laid to Rest, the consensus was pretty unanimous that this was a solid "new" slasher with some outstanding gore. Of all the sites I visited, I'd say the positive overall percentage would probably be about 80% positive, which in the horror genre is pretty damn good. So I was sold, and it was settled; Laid to Rest would be our slasher screening for Friday the 13th for our movie group.

I wish I could take that decision back. I wish we had just gone with an old favorite, or just gone the complete opposite direction and tried a new horror/comedy that I've had my eye on on Amazon called Gravy. But no, we chose this and we paid dearly for it. What's funny is that 2 members of the group had already seen this, and said they loved it. So with that, we were pumped and started the show. What resulted was one of the worst slasher films we've all ever seen. A dumb uninspired mess that shockingly misses a great opportunity to bring a new character and franchise to the slasher genre with bad direction, terrible dialogue, and a muddled, dull and unevenness that make it hard to stay focused while continuously looking at the clock. Not surprisingly, the 2 members of our group who had seen this already both agreed that it was bad, and were surprised that they liked it in the first place. 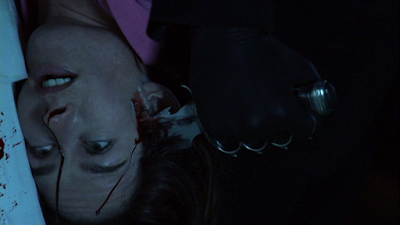 What's a shame is that while the film lacks a lot of what makes a solid horror film good, like decent character development for one, where the film does shine is in the gore and effects, which, quite honestly, are pretty outstanding for such a low-budget film. That isn't all that surprising since this films writer/director, Robert Hall, is a special makeup effects wiz, who's effects company Almost Human is responsible for a LOT of outstanding effects work in film and television. What's frustrating is that while the effects work is commendable for being traditional and for the most part, non-CGI, there just isn't enough of those kills and sequences to keep this oddly incoherent and disastrously amateur-looking effort from being a bore.

A few things surprised me about the casting in this. For one, the short cameo's, while not really all that spectacular, were solid enough to elicit audible comments like "She's in this?" and "Him too?!". You know who they are. You recognize them from more commendable work, and all in all, it was the little spice this film sorely needed to keep you invested. The primary actors were not bad, though the dribble they unfortunately had to droll out was embarrassing, made all the more cringe-worthy in their forced overly dramatic southern accents that felt so unnecessary and out of place. It's almost as if it's done on purpose, like caricatures you find in slashers, commonly known as "hicks". Maybe that was Robert Hall's intention after all? Kind of like how Rob Zombie infuses it endlessly in virtually all of his films, including his Halloween franchise. In either case, whether intentional or not, they all come off as silly in Laid to Rest, and it's really hard to take anyone or anything seriously. 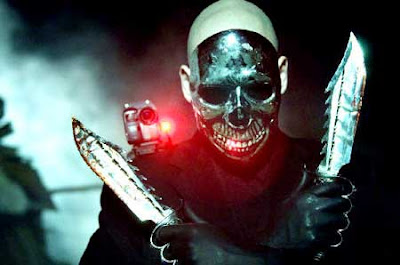 While it's not always standard practice to give away "everything" about a killer in a horror film, at least "some" kind of history or motive, even in the smallest detail, would help you understand why anything is even happening. Unfortunately we are not afforded that luxury here. I can only assume writer/director Hall did this on purpose, saving the reveal or even the motive for the inevitable sequel. Which brings on another thought. He really must have been confident enough to know that he would eventually get the chance to make that sequel, because he reveals nothing about the killer in this, and it's incredibly annoying. As I never intend to actually watch the sequel now that I've seen the first one and do not like it, I'll just have to live with the fact that I'll never know why a killer - who never utters a word, or even winces or groans when he gets shot or mutilated in some form, and wears a rather rad looking chrome skull mask that he glues to his face - kills random people, and who seems to zero in on this one particular girl he just won't let go. None of it makes any sense and there's no rhyme or reason to any of it. That, coupled with the uneven tone, bad direction, bad writing, out of place southern accents, and long moments of boredom, make for a near excruciating experience.
Posted by robotGEEK at 6:44 PM