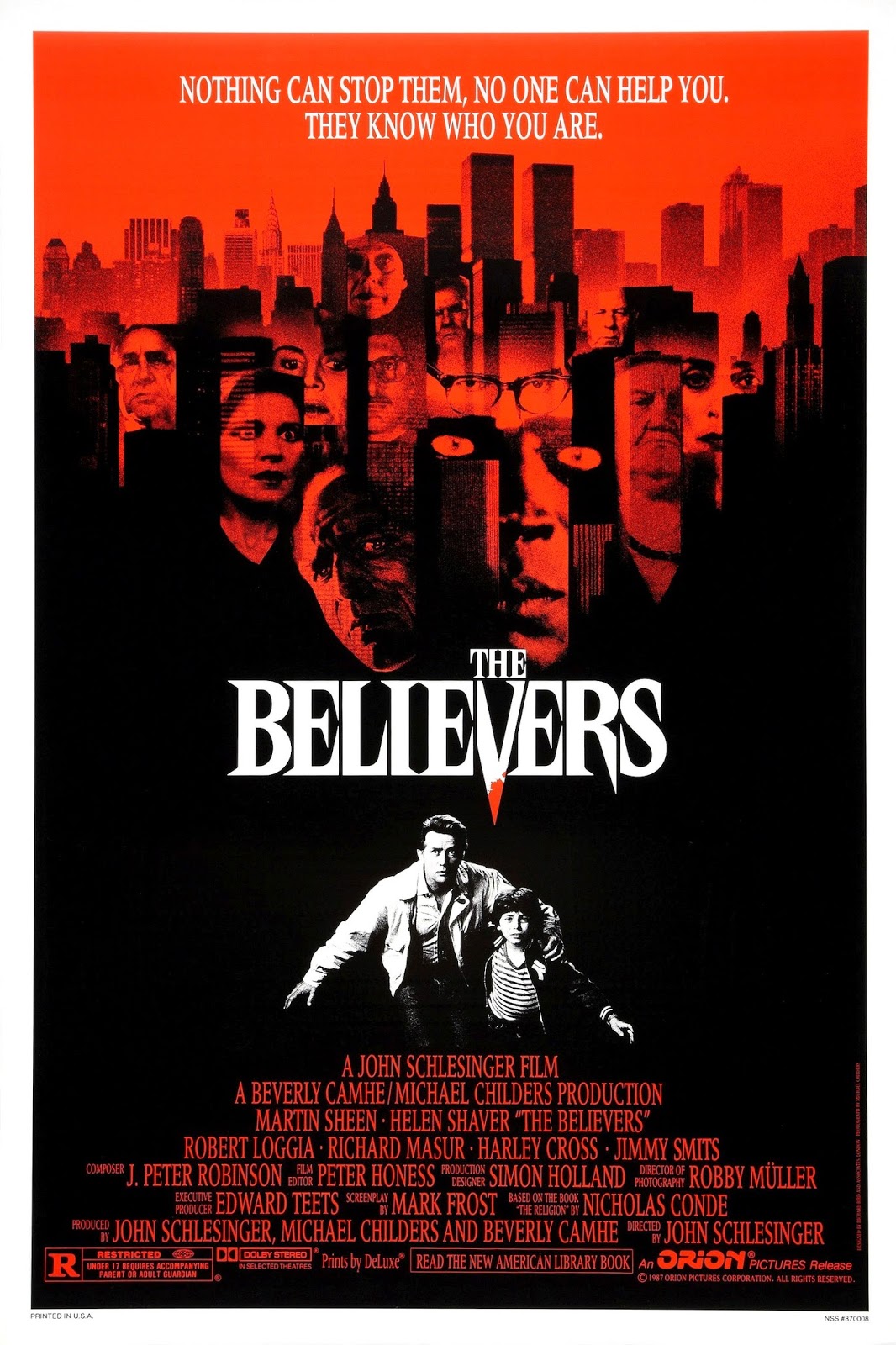 What I'll remember most about this film more than anything is the year 1989. 2 years after this film was released, an Austin, TX college student by the name of Mark Kilroy vanished while on Spring Break vacation with some friends. While bar hopping one night in Mexico, he got separated from his friends and vanished. Despite massive searches, he was never found. Some time later a high speed chase from the border checkpoint ended on a farm in Mexico, where it was soon discovered that Kilroy, along with 14 other victims, were buried on the premises, the result of human sacrifices by drug dealing cult members who practiced Santeria and Brujeria, often mutilating, eating and cooking the body parts of their victims for their rituals. After a shootout, the cult's leader was killed, along with an accomplice, and his second-in-command (Sara Aldrete) was arrested along with the others.

After their arrest, it was discovered that their favorite movie was The Believers. As soon as this was made public, every video store in Texas took this film off their shelves indefinitely. I live in deep South Texas, roughly about 30 minutes from where all this went down on the other side of the border. So this hit close to home. It was a huge deal here and is still considered folklore in this area. From what I recall, once the film  was pulled off the shelves, it would be many, many years before it would become available again. It's crazy to think that after 25 years, I still remember the name of that kid. What's even crazier still is that when I finally decided to revisit this recently, I didn't really see anything that would cause any normal human being with a rational thought process to think that doing anything this film depicts would actually result in.......well anything that wouldn't put your ass in jail for the rest of your life. Honestly, nothing is plausible in these voodoo rituals. But apparently this drug gang believed it all enough to copy them.

After the shocking and sudden death of his wife, psychiatrist Cal Jameson (Martin Sheen) moves to New York City to start over. He's soon recruited by the police force to help them with one of their own officers, who's being held on a psychiatric hold after having what appears to be a nervous breakdown. Jameson soon discovers that this officer was involved in something much more sinister, as his own world is turned upside down as he's unwittingly sucked into a world of voodoo and Santeria, culminating in a shocking conclusion.

Written by Twin Peaks co-creator and co-writer Mark Frost, director John Schlesinger (Midnight Cowboy, Marathon Man) infuses this thriller with enough bravado and class that through his sure-handed brand of filmmaking, you stay invested, even if it isn't the most exciting thriller you've seen. What sells it is Martin Sheen's conviction. It's rare when we come across a film where he's the star, and not a villain or supporting actor. This was his first foray back into theatrical films after 3 years of exclusive television made-for-tv work, and thankfully Sheen didn't miss a beat. He's just excellent in this, and I don't think the film would have been as strong without him. With that being said, while it was nice to revisit this, it wasn't exactly the nail-biter I was hoping it would be. It's got some great things going for it, but it often felt a bit too long and dull in some areas, and when you consider that this film seemed to inspire some delusional people into doing some pretty atrocious things, there wasn't anything in it that was so far fetched that I would have ever believed it would be so controversial. Yet it was, and all because of a handful of idiots.

I haven't seen a lot of what director John Schlesinger has done, but I know he's regarded rather highly for his craft. I did enjoy Marathon Man immensely. And I remember being creeped the fuck out by Michael Keaton in Pacific Heights, but I don't think I've seen anything else he's done. In any case, solid filmmaking all around. I just wasn't thrilled, I should say, as much as I was hoping to be. A solid thriller, with some mystical overtones that doesn't quite grab you fully, yet slightly makes up for it in the end.
Posted by robotGEEK at 4:14 PM