One Man's Justice AKA One Tough Bastard 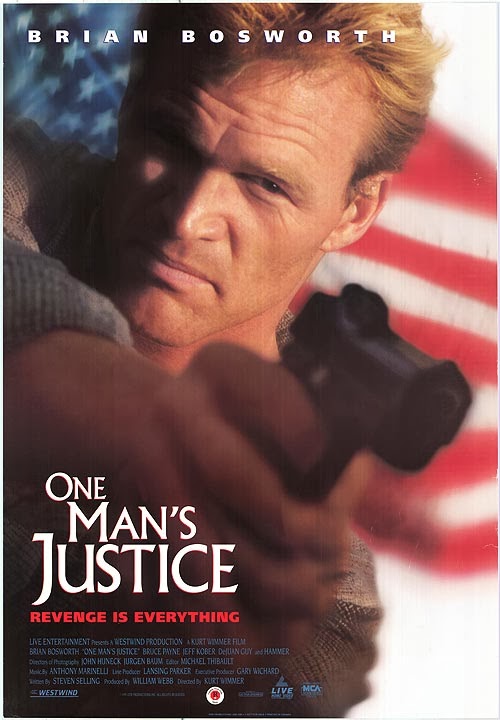 I'm a sucker for 80's and 90's action films. It doesn't matter if they were theatrical releases or DTV fare. If it's good, it's good. Because even with the DTV stuff, you find a solid gem in there every once in a while. In fact, some of my favorite films are low budget action films. Seriously, you'd be surprised what you find if you take the time to look.

I recently caught the excellent Brian Bosworth starring and Craig R. Baxley directed Stone Cold. A prime and essential piece of 90's Badass Cinema. But it got me to thinking why Bosworth never became the next big action star like he was supposed to be. Stone Cold was a very good start. I mean, it's not every day that you get your first film to be a big budget theatrical action film with all the bells and whistles that's also directed by action god Craig R. Baxley (I Come In Peace, Action Jackson). Van Damme certainly didn't. He had to work himself up out of low budget obscurity. Seagal? He fared a little better as Above the Law was a decent budget made by an action veteran. But here's the thing. It was 5 years after this film until Bosworth appeared in anything else. Which brings us to One Man's Justice AKA One Tough Bastard.

Browsing Netflix Instant a while back I came across this in one of the "recommended" lists. Hey, it's Bosworth so I put it in my "list". It was only after I did that when I realized that it was directed by Kurt Wimmer. Now, I'm not the biggest fan of this guy, but he's a big enough player in the film community that if I see his name attached to something, I'll definitely give it a shot. For those of you who are not familiar with this guy, he wrote and directed Equilibrium, a film I have yet to check out. But he's mainly a screenwriter having penned films like Salt, Total Recall (2012), Law Abiding Citizen, The Recruit, Street Kings, and so on. And just so it's clear, he didn't write this film; he only directed. So yea, I see his name and immediately think this is going to be better than I thought it would be.

Ha! Well, yes and no. Yes in the sense that it was a completely and thoroughly entertaining film from 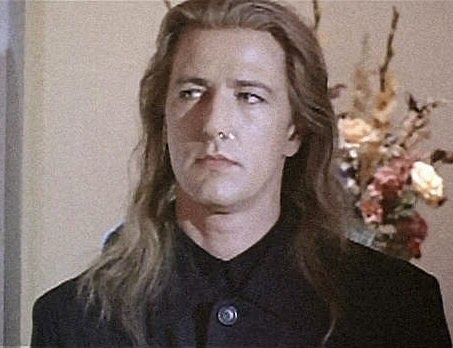 beginning to end. No in the sense that it's for all the wrong reasons. This my friends, is probably one of the best unintentionally hilarious and downright dumb action films I've ever seen. But in a good way. The plot holes in this thing defy logic. The film itself looks like it was made for television, except with a healthy dose of blood and violence. And while Bosworth comes across as a better actor than he did in Stone Cold, which is not to say he was bad in that. He was just a little stiff in my opinion. But here he comes off a little more natural than before. But the scene stealer in this film is Bruce Payne as the villain. Words alone cannot
express how ridiculous his character is in this film. Payne chews up every single scene with such gusto that I honestly can't figure out if he was actually trying to come out as over-the-top or if it was by accident. In any case, the guy owns this film and every single second he appears on screen is goddamn gold. Now I've seen Bruce Payne in plenty of films, some good (Passenger 57), some not so good and some just flat out terrible (Dungeons & Dragons). Here though, here he shines like a fucking rock star. Which is fitting because he kind of looks like one too. It's funny, he's supposed to be playing an FBI agent, yet he looks like someone right out of Def Leopard with the long hair, long black leather trench coat and two nose rings.

Basically this is a film about revenge. Bosworth plays a drill sergeant who's family is killed in a botched convenience store robbery. After waking up from a coma, he sets out on a mission of justice to catch the guy who killed his wife and daughter. Soon after he realizes the guy is just a pawn in a much bigger conspiracy led by crooked FBI agent Karl Savak. A guy who almost sounds like a British guy trying to pretend to be a British guy doing an American accent. Lost? It's hard to explain. Just listen to his line delivery and you'll know exactly what I'm talking about. But this is Payne's movie my friends. Payne makes this film. 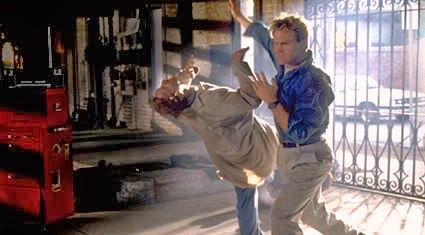 I think what I loved about this film, besides Payne's kick-ass scene chewing, is that it's never dull. Not for one single second. The film opens with an almost hilariously dated and cheesy opening credit sequence of Sgt. John North (Bosworth) running in the dessert while his little daughter is timing him. It's just the way it's shot, the location, the music, the credits font; all very surreal in a funny/cheesy 80's/90's sorta way. But it's fun. It's almost like it's trying to throw you off a bit because the film keeps a break-neck pace with enough action and violence to keep you satisfied. I had read a review before I sat down to watch this that said there wasn't enough action or blood in this. I couldn't disagree more. With low budget action films, it's always a 50/50 chance of there being not enough, or more than you were bargained for. One Man's Justice definitely kept me satisfied in that department. There's some cool and well choreographed fist fights, shoot-outs and even a killer "death at a gas station" scene that surprised me.

Kurt Wimmer has only ever directed 3 films in his career. This is his first film as a director, followed by Equilibrium and then Ultraviolet. I'll be honest, since I haven't seen either Equilibrium or Ultraviolet, I can't be too harsh. But just judging from this film, directing is not his strong suite. As I said before, it looks and feels like a made for tv movie complete with some bad angle choices and lazy hand-held camera work. But there are a few scenes that shine, and more than the bad stuff, that's probably what you'll remember more. I'll give it to the guy though, he can film a fight scene rather well. One Man's Justice is Steven Selling's only writing credit, and it shows. This thing is chock full of ridiculous plot holes that even the casual moviegoer will be saying to themselves "Now wait a minute". But I have to admit, I would have loved to have seen what other train wreck he could have come up with.

So how about the supporting cast? It's pretty damn eclectic and badass if you ask me. So we have Bosworth kicking some ass and showing some maturity in his second acting gig. But when it's all said and done, it's Bruce Payne's villain that really makes the film what it is. But we also have the one and only Jeff Kober (The First Power) as a wannabe white gang banger, MC Hammer (here only known as Hammer) as a drug kingping (yup, you read that right), even Neal McDonough pops up in here in a small part. You've also got some standard "go-to" guys filling out the cast of baddies.

I don't know. There's just something about this film that clicks. Like all the right ingredients were all put together in such a wrong way that it created a beautiful disaster. That's what this film is....a fucking beautiful disaster. You know what this reminded me of? An Albert Pyun film from the early to mid 90's when he was firing on all cylinders and delivering his best output. I actually wish Pyun had made this one himself. I can only imagine it would've been even better and more enjoyable.

One Man's Justice AKA One Tough Bastard is currently streaming on Netflix.

Posted by robotGEEK at 3:58 PM