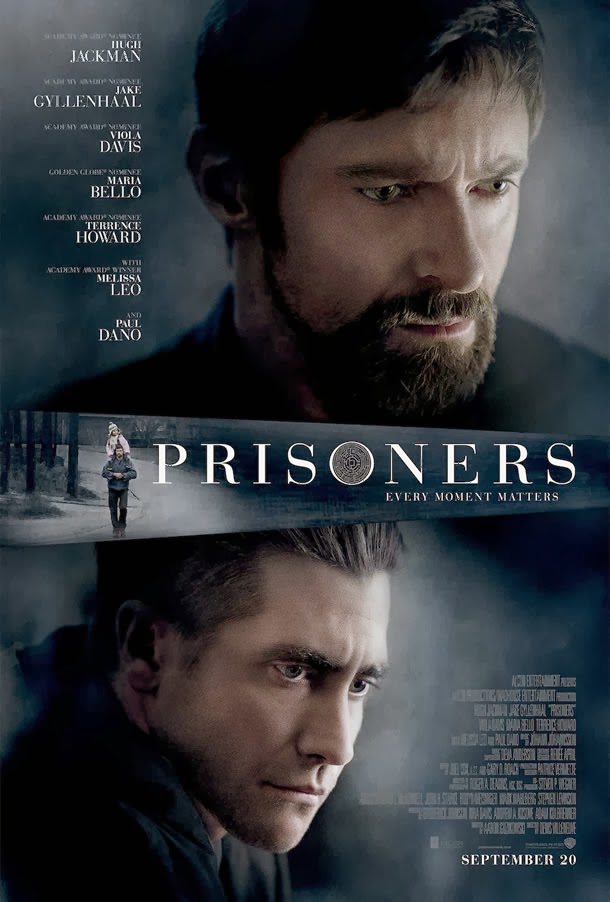 I've been watching a shit-ton of films these past few months, but still haven't been in the mood to sit down and say anything about them. However, after sitting down to catch this little gem, I feel compelled to say a little something because I don't think enough people know about it. I certainly didn't.

Prisoners, is without question, one of the most gut wrenching and intense psychological thrillers I've seen in ages. What a complete and total surprise this one was. A slow, dark, bleak and exhaustingly unnerving thriller about a father (Hugh Jackman) who's daughter disappears and decides he will do whatever is necessary to get some answers and hopefully find her. Jackman, to his credit, just nails the part as an angry, desperate father with no limits to what he's willing to do or how far he will go to get answers. He's also surrounded by a pretty stellar cast that includes Jake Gyllenhaal as the confident and moody detective assigned to the case, as well as Viola Davis, Terrence Howard, Maria Bello, Melissa Leo and Paul Dano. Every one of them giving outstanding performances in a truly horrifying situation. It's really Jackman who comes out shining though. We may always know him as Wolverine, but when given the right material, the guy can turn out some Oscar-worthy performances.

I had heard about this film when it was hitting a few festivals before it's official release, and of the few I had read, every single one was 100% positive. Now I see why. As often as they make films these days, I can honestly say that they certainly don't make them as good as this, or rarely might be the correct term. It's extremely rare when a film comes out that has so much depth and substance, and also looks as good as this film. While the great cinematographer Roger Deakins has a lot to do with that, I think it's also what French Canadian director Denis Villeneuve is able to accomplish with the right talent both in front of and behind the camera that will surprise mostly everyone. This guy will be one to keep an eye on. If he's able to pull this much off with his first American release, I can't wait to see what he has in store. The good news is that we won't have to wait long actually. Along with Prisoners, he made another film the same year in 2013 also with Jake Gyllenhaal called Enemy. Not sure if that's getting a wide release here or not but in any case, it should be hitting DVD and Blu ray shortly.

Prisoners is so fucking effective, with a knockout ending that I did not see coming to boot, that I'm not really sure where the problems come in terms of trying to pinpoint why this doesn't have the recognition it deserves. It may be the marketing I suppose. On the surface it looks like your typical thriller. It is, in fact, a thriller.....yes. But not the type you are expecting. So without giving too much away, I don't know how else they could have promoted this. But it also suffers from a major problem we have had since the 90's here in Hollywood in terms of cover art. Just look at that lame excuse of a poster. I recently saw an amazing documentary on legendary Hollywood film poster artist Drew Struzan and he summed it up perfectly. He said that these days, no matter what genre it is, a poster will consist of just two heads photoshoped together to create a poster. Prisoners is the PERFECT example of this lame excuse for fast, cheap and unfortunately "standard" practice in the film business. The age of the hand-drawn poster art is long gone. Because what does a poster like this tell you about the film? Nothing. Not one goddamn thing. But that's Hollywood for you these days. Instead of hiring an actual poster artist to put some thought and care into an image, it always feels like they hire some kid outta high school to come up with something in an hour.

Prisoners is an unexpected surprise and a completely satisfying thriller that will stay with you long after it's done. Do yourself a favor and check this sucker out ASAP. You'll thank me for it.
Posted by robotGEEK at 3:41 PM