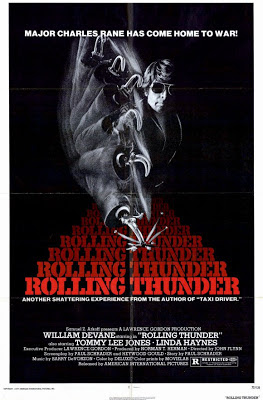 This is one of those films that I always meant to see, but somehow always passed me by. And it's got quite a reputation as a cult classic, yet never really got very considerate releases since 1977, until Shout! Factory released it on Blu Ray recently with a beautiful widescreen transfer. So now I finally had a chance to see it the way it was meant to be seen and here we go.

As far as revenge films go, this one's pretty great. Now keep in mind that it's a slow burn kind of a film, but it's building up to a climax, you can just feel it through the entire film, and when it does, it's pretty fuckin' fantastic. But I knew it was going to be good, even if I wasn't so sure with the opening. Once I saw Paul Schrader's name in the writing credits, and always being a fan of director John Flynn, well my mind was put at ease.

I think it's best to know before going in that it is a slow film for the most part, with not a lot of action or even suspense. Most of that is all saved for the third act. But what you get is a character study of a man who's returned home from the war, who's so reserved it almost drives you nuts. He knows his wife is having an affair with a local cop, but he doesn't seem to care. His wife and son are murdered right in front of him during a robbery attempt, as well as having his hand mutilated, and you'd never know it by his stone cold demeanor. But he's formulating a plan in his head. He rarely speaks, and never shows emotion, but you sense that he can explode at any minute. And that's a rare thing to see in this type of film. We're so used to seeing the central character angry, furious and hell bent on revenge, but you don't see that in him. You get bits and pieces of what's going on in his head from time to time, but it's not really until halfway through that you realize he's about to do something, something that he can't walk away from.

With a well rounded cast that has William Devane playing Major Charles Rane as the man on a mission of revenge with a quiet intensity, there's also a very young Tommy Lee Jones and a surprising small bit with Dabney Coleman. But I think what really pulls everything together perfectly is Flynn's sure-handed touch behind the camera. I've always admired his work, and count his Out for Justice as one of my favorite Steven Seagal films. Here, he makes everything look tough and gritty, but it looks good. And the man knows how to stage a sequence. That finale is pretty damn fantastic.

Apparently Shrader wasn't happy with how this turned out because it's not what he had envisioned, but I like it. I think it's a great example of the revenge thriller. Coming out of the late 70's only adds to it's visual panache. Probably not something I'll revisit again for quite some time, unless I'm showing it to a buddy, but a pretty badass late 70's film done extremely well with an awesome finale if that's what you're in the mood for. Those are my thoughts.