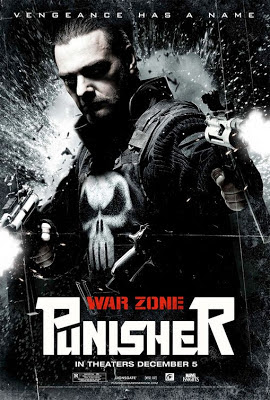 Holy shit. Why does Punisher: War Zone get no love??
And how have I let this one pass me by for so long before revisiting it?

First thing's first. Let me begin by saying that when I saw this in it's initial theater run, I honestly didn't like it very much. "What the hell's wrong with me?!" you say? I have no fuckin' idea. I just didn't dig it for whatever reason. And I wish I could remember why and give you specifics, but I honestly have no clue why I didn't like it back in 2008.

Flash forward 5 years and I have a whole new appreciation for this insanely graphic and extremely over the top piece of Badass Cinema. Why you ask? Well, for starters, our good man Jack over at Collected Cinema recently did a "Completist Guide to the Punisher Series", which you can find here. A really great read as he reviews all three Punisher films, with which I'm pretty much in agreement with on all points. But it was that article that got me thinking about this film again and deciding that I should maybe give it another shot. You see, when I think of The Punisher, I automatically just revisit my one and only favorite Dolph Lundgren starring 1989 low budget incarnation. I can't explain it, but I just love the shit out of that film. Even if you take the whole Punisher mythology out of the picture, it's an insane piece of action filmmaking and one of my favorite films.

So after reading Jack's review, I'm all kinds of excited to check this out again. I run to my local rental store and check it out, pop it in the player and BAM!! Immediate onslaught of violence and carnage like I haven't seen before. I mean, this thing is nuts, in all the right ways. You keep telling yourself "Did I just really see that?", because there is some batshit crazy type of violence in this thing. So before I go any further, I suppose it's only right that I say "Thank You" Jack.

Somehow, in some way, most people seem to like Thomas Jane's Punisher film the most. I don't get it. I see what writer/director Jonathan Hensleigh was trying to do, but it just doesn't work for me. And the tone for most of the film doesn't support the style he was going for. That whole thing with the neighbors in the apartment just doesn't mesh well the film as a whole and just throws everything off. And worst of all, you barely see The Punisher actually kill anybody. But in War Zone, holy hell, you see blood spraying carnage in the opening sequence and it does not let up until the film is over. Kudos to Lexi Alexander for not submitting to outside interference by toning down the violence. Instead, they seem to go out of their way to shock you, which is always a plus in my book. But what also works is it's relentless pace. You never have time to get bored.

Aside from it's relentless pace and overabundance of flat out violence, this film looks beautiful. Director Lexi Alexander has done such an amazing job visually filling the screen with lush vibrant colors, beautiful cinematography juxtaposed against jaw dropping violence. The film just looks simply stunning. Alexander films this the way an action film should be made, with style.

Of all 3 Punisher films, Dolph Lundgren will always be my favorite. That's just the way it is. But I have to admit, Ray Stevenson actually looks and sounds like The Punisher should look and sound more than anybody. Perfectly cast in my opinion, and the best looking Punisher to date. You know, as I write this, I'm starting to get irritated. All these years everyone bitches about there not being an awesome Punisher film. Well here it is, yet it made no money, much like Dredd (another favorite) and is considered a flop. How? I mean, this has everything you want in a Punisher film and then some, yet it's still not enough to make everybody happy. I just don't get it. Maybe they'll attempt another interpretation in the next few years or so, but I can't imagine it being any better or as entertaining as this Badass Mutha.

Complaints? Just one really. I would have loved to have seen the iconic skull symbol more prominently displayed. Yea, it's there, but just barely as it's a heavily faded image on his bulletproof vest. Director Alexander was opposed to even having a skull period, but gave in to pressure. And me just being a die hard comic book fan of The Punisher going back to the 80's when I first started collecting them (still got my set of the initial Punisher: War Journal), I just wanted to see it as the two previous Punisher films failed to do it. I mean, it's just so iconic. I just wish it was much more of a presence in the film that it was. So yea, kickass film full of style sprayed red with blood. I love this film.
Posted by robotGEEK at 2:51 PM