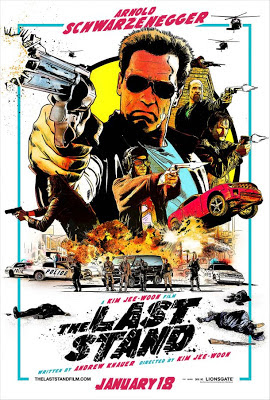 Oh man, I'm so torn with this one. I really am. On the one hand, as a die hard action fan who grew up in the best possible time for action cinema, the 80's and 90's, I am happy to see Arnold return back to making action films again and picking interesting directors to work with. On the other hand, this isn't nearly as good as I was hoping it'd be and that really kinda shocks me considering all the talent involved. But, I will say this. It's a helluva lot better than Stallone's last solo feature Bullet to the Head. What a seriously missed opportunity on that one. But this one is just marginally better.

Being that this was director Kim Jee-Woon's first American feature I was really surprised at how subpar this was, considering this is the man who kicked my ass with his amazing and brilliant serial killer/revenge film I Saw the Devil. You'd never guess this was from the same director. Don't get me wrong, there were some nice shots, but the majority of them didn't really stand out, neither does a lot of the film in general, which says a lot. There are some fine action sequences, but they feel few and far between, and to me the comedy element played out way too much for my taste. I knew there would probably be some, especially with Johnny Knoxville on board, but I don't think I was expecting this much comedy in a Schwarzenegger action film to be honest, and especially not in his first stand alone return to action cinema.

When I first started hearing about this film in pre-production and what the story was going to be about, I have to tell you that I pictured something completely different than what ended up on the big screen. Essentially it's a standoff film. Schwarzenegger plays a small town border sheriff who knows a Mexican drug kingpin is on his way to him to get to the border, and Arnold's character, with the help of his small staff, are the only thing standing in the kingpin's way. I pictured something small in scale, and something that played out more like a western, only in modern time, kinda like Walter Hill's 80's classic Extreme Prejudice. That's exactly the kind of film I was expecting in look and tone, and after hearing Jee-Woon was at the helm, I thought he could certainly deliver. Eh? Nah. That's not what we get. Instead we get an uneven over-budget action film with way too much CGI and seems to play more for laughs than to cater to a genuine action fan.

You know, despite not starring in a film for a number of years, ol' Arnie hasn't lost his touch. He's not any better, but he's not any worse either. He's Arnold Schwarzenegger plain and simple (he still hasn't lost the accent?). And everyone else is fine in their roles, except for the main baddie Gabriel Cortez (Eduardo Noriega). I'm sure they coulda done worse than this guy, but holy shit did he suck.

All bitching aside, at least the film looked half way decent. No shaky-cam quick-edit bullshit. So that was a relief. I wish I could have said the same for action legend Walter Hill's return to the directors chair with Bullet to the Head. Lazy man, just fuckin' lazy filmmaking.

So yea, it was alright and a good time waster, but it didn't knock my socks off. So far that's 2 for 2 with both Stallone's and Schwarzenegger's first solo films out since The Expendables bombing at the box office and in my opinion, in quality. Let's hope there next collaboration Escape Plan (formerly The Tomb) fares better.
Posted by robotGEEK at 2:05 PM