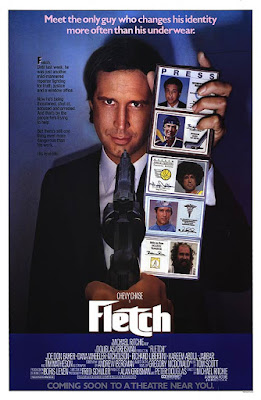 Crime Film? Or Comedy? You Must Decide
by robotGEEK
For some reason, I never got around to this one until now. And seeing it for the first time, I was surprised that it wasn't nearly as funny as I was expecting. While it's no dud, it actually plays out better as a crime film than a comedy. While there is certainly attempts at comedy, they rarely ever generate a laugh. At least for me. I hear the books are rather hilarious though. And I will admit that Chase is on fire here and really, had it been anyone else in the role, Fletch would have been completely forgettable. Here you can see him doing a lot of improv, and while they're still not all that funny, they do make the scenes a lot better overall.

The crime/investigation aspects of the film are what draw you in for the most part, where Chase plays an investigative reporter on the trail of a hot story involving police corruption and drugs. I was genuinely surprised that the film succeeded more in this area than in the comedy, but I think that just goes to show you that Fletch, for all of it's issues, does surprise you. Whether it's a good surprise is up to your mood or taste. As it stands, Fletch was only marginally funny, and the film as a whole only works because of Chevy Chase.

I hear a reboot is in the works with Jon Hamm? While that idea is interesting, they really need to figure out what genre they're attempting first, because this version certainly wasn't a comedy, even though it's marketed as one. Don't get me wrong. I enjoyed it. It was just a different type of film than I was expecting. Killer theme song by the great Harold Faltermeyer by the way. I mean, it's really great and probably one of the most memorable things about the film.