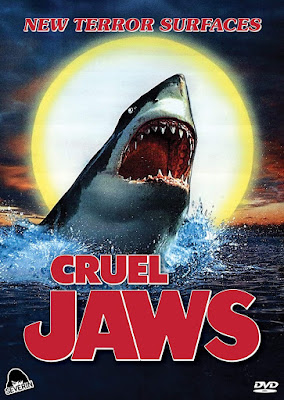 Somehow, despite my appreciation for Bruno Mattei films, I never actually got around to this one until now. And it's only because it was streaming on Amazon Prime that I finally got the chance to because I never really felt the urge to try and get myself a copy. But boy was I missing out, because Cruel Jaws was just as unintentionally hilarious as we were hoping for.

This legendary Jaws ripoff is almost a blueprint for how to take a well-known property, steal from it shamelessly, and deliver some of the most hilariously amateurish productions I've ever seen, despite the fact that Mattei had decades of film experience under his belt. Atrocious acting, hilarious dialogue, bizarre camerawork (what the fuck is up with all those weird zooms???), rampant use of shark stock footage, and repeated use of the same footage over and over again makes this Bad Movie Night GOLD. Not to mention there are really crazy looking actors who resemble other actors, like the poor man's Hulk Hogan and someone who looks shockingly like a young Billy Zane.

It's crazy to me to think that Bruno Mattei (Strike Commando, Robowar) made this in the mid 90's, when it clearly looks like the person behind the camera has never made a movie before in their life! But that's the beauty of this oddity in a lot of ways. There are moments where they blatantly steal the Superman theme song for a few scenes, and if you look closely, they literally steal shots from Jaws! Endlessly entertaining, shockingly inept and unintentionally hilarious, Cruel Jaws was a blast from start to finish.

In a time when it feels like we've probably seen all of the "so bad, they're good" movies, it's refreshing to stumble upon one that we actually hadn't seen, and was in fact so bad, it's good.

Cruel Jaws was released on DVD and Blu Ray via Severin Films back in September of 2020, and can be picked up via your favorite online retailer like Amazon HERE. It's also currently streaming on Amazon Prime in HD.

Posted by robotGEEK at 3:12 PM