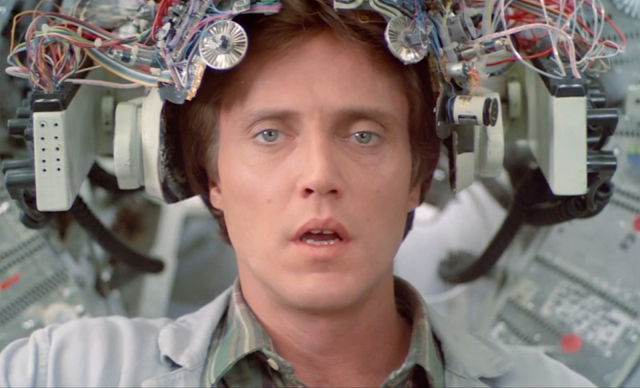 This is a film I'd always been aware of, but never thought twice about. That is until I came across a fascinating article about the films tumultuous and troubled production, which always fascinates me about films. Sadly, most people will always automatically associate this film with co-star Natalie Wood's untimely death, which happened during this film's production before she was finished shooting all of her scenes, but really that's just only one of the things that doomed this film from the start if you look into the films history. But guess what? For a film that nearly didn't even get released at all because the studio instead wanted to cash in on the insurance money and claim it a loss, Brainstorm is actually amazing. In fact, it's easily one of the best Techno Thriller's ever made, and one of the best thrillers I've seen in the last couple of years. Brainstorm deserves so much more recognition. 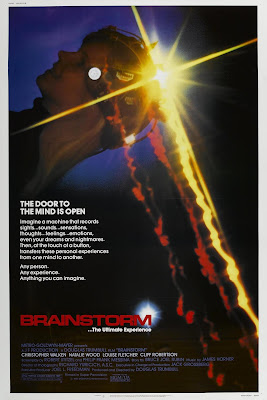 Released in 1983, Brainstorm follows the story of Michael (Christopher Walken), a scientist, who along with Lillian (Louise Fletcher) and a small team, have invented the first ever virtual reality experience where they can not only see what someone else can see, but they can taste, smell and feel those experiences. Naturally, the U.S. government wants to get their hands on this technology, much to the dismay of the team, and a race against time will determine the outcome.

This insanely riveting film experience comes to us courtesy of special effects legend Douglas Trumbull, who has worked on classics ranging from 2001 and Close Encounters of the Third Kind to Blade Runner. Here he wrote and directed the film (his second directing effort after Silent Running 11 years earlier) and wanted to give the audience an experience unlike anything we'd experienced before by creating something called Showscan, a 60 frame per second process that ultimately was too costly for the studio to try. Basically, Trumbull had these really great ideas for this very special film but nobody to support it. He wanted to do something that gave the audience the same feeling the characters were experiencing while in the virtual reality world. In the end, he was told by the studio that the normal scenes would be shot in 35mm, and the virtual reality scenes in 70mm, which is why the widescreen format keeps changing back and forth throughout the film. In any case, it was a way for the audience to differentiate between the real world and the VR world.

For a guy who had only directed one single film before this, and 11 years prior for that matter, Brainstorm is such a delicately polished looking film. It's the kind of film that looks like someone who's been directing big budget films for years had done, and that's a testament to Trumbull's clear unique vision and talents behind the camera. The film is awash in beautiful modern architecture, splendid visuals, strong performances and some insanely impressive effects work and compositions. Not to mention it's both compelling and riveting, as much as it is entertaining and suspenseful. The fact that I hadn't seen it until now, or that it rarely ever gets mentioned at all just blows my mind. Immediately after watching it I got online to snatch up the Blu-Ray, only to discover it hasn't yet made that leap to HD, which both saddens me but also doesn't surprise me.

This was a time when Christopher Walken was really breaking out into leading man territory. While that didn't really last too long, he surely gives a great performance here, even with his odd mannerisms and all. The scene-stealer in this film though has to be the one and only Louise Fletcher, who plays Michael's lab partner Lillian. She carried such a ferocious spunk that it's impossible not to love her in this and I'm not surprised to learn it was the most fun she had making a film. 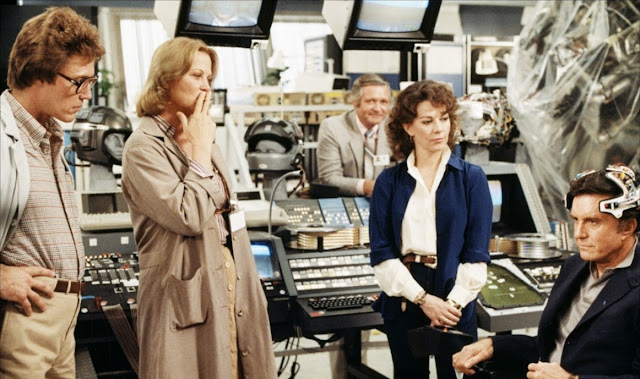 Natalie Wood is excellent as well, and so darn cute. It's a shame this would be her last film. Reports state that she hadn't finished shooting all of her scenes so Trumbull had to rework the ending and use stand-in's for certain shots. It is also said that her death was one of the main reasons MGM, going through financial difficulties at the time, was ready to throw in the towel and recoup their loses through their insurance, but Trumbull insisted on re-cutting it. He knew he could save the film despite MGM's insistence that they just scrap it. So seeing as I just loved the film to death as it is, I'm curious how different it would have turned out had they been able to shoot it the way Trumbull initially wrote it without having to change things due to Wood's premature death.

It's a shame and travesty this doesn't get more love, or that most people have never even heard of it. Douglas Trumbull's experience was so heartbreaking and frustrating that he vowed never to direct a Hollywood film again, and he's kept his word. This film experience ruined any dreams he might have had to direct feature films again. Yet, 36 years later, it remains a technical marvel and easily one of the best surprises for me in the last few years. It's a film that invented the Virtual Reality concept before it was ever something that could become a reality, which would still take a few more decades. It reminded me a lot of Michael Chrichton's excellent Looker, as well as John Carpenter's Starman, 2 films I love to death, and I'm incredibly happy to find another film that compares to those gems. If you're looking for something different, smart, classy, clever and downright excellent, give this one a watch. I'm sure you'll enjoy it. Here's to hoping for a Blu-Ray release in the near future.