Steve Wang's Drive is a film I've been itching to see for many, many years. While not impossible to find, it was hard enough that I didn't really try all that hard. Here in the U.S., its never gotten a DVD release, only having been released officially on VHS. I know there were some downloads to YouTube, even in widescreen, but I just always forgot about it. That is until recently, when a friend of mine, Michael Cook from Retro Rocket Entertainment Podcast Network, mentioned it was available on Amazon Prime for free this month, so I took that opportunity to finally give this a watch and boy am I glad I did.

Toby Wong (Mark Dacascos) is a human prototype capable of superhuman speed and strength. When a wealthy Chinese billionaire, the great James Shigeta (Mr. Nakatomi from Die Hard!) wants the prototype destroyed, he sends a hitman and his crew to destroy him. Wong then teams up with an innocent bystander (Kadeem Hardison) to help him escape a nearly neverending pursuit of death-defying chases, fight scenes and explosions.

Released in 1998, Drive comes to us courtesy of Special Effects master (Predator), and sometime director (The Guyver 1 & 2) Steve Wang. Yet for some reason it's never gotten a full blown solid release here, which blows my mind, because it's arguably one of the best buddy/action movies to come out of the 90's. To put it frankly, Drive is fucking awesome. A blast from start to finish, filled with some seriously impressive martial arts action and choreography, along with some killer visuals. 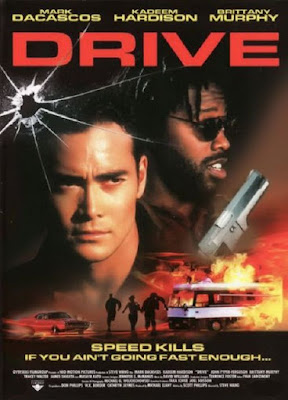 If there's anything this often-forgotten action classic taught me it's that Mark Dacascos is an underrated badass, and that Steve Wang is a damn fine director. It's a crime he didn't blow up after this as an action director, because the stuff he pulls off here, even in terms of composition, is highly impressive. Frankly, I'm shocked he didn't go on to do more action films. Dacascos though, is such an undervalued martial artist. I mean, I know he's been working nonstop and has appeared in some great things, but he should be a much bigger star than he is. I'm psyched he's going to be in John Wick 3 though, so hopefully that will give him a resurgence of sorts.

Hands down one of the biggest surprises I've come across in the action genre this past year, Drive deserves a much bigger audience. I can't believe it hasn't gotten a bigger and wider release here in the states on any format. Even a DVD would suffice, but as of now, nothing. Here's to hoping it gets a snazzy Blu-Ray release soon from a cult film distributor. Drive is an adrenaline-fueled action cult classic that will blow your mind with it's sheer volume of insane action, stunts and martial arts, with none of the annoying shaky-cam/quick-edit crap that seemed to permeate the market after Taken and The Transporter. Despite it's limited budget, you would never know it. Wang handles the production, visuals and action like a pro, and Drive easily rivals any big-budget action flick that hit our local cinema's at the time. In fact, it's easily better than most of them and Drive is an underrated and underappreciated action masterpiece.

How to see it:
Currently it's streaming on Amazon Prime for free this month (January), and in widescreen to boot. The only physical release we have in the U.S. is VHS. If you have a region-free player, it's been released on DVD in other parts of the planet, though I haven't heard of a blu-ray release yet. But I could be wrong.

UPDATE:
Well apparently there was a U.S. DVD release but it's so rare that it's almost impossible to find. I don't know what the quality was on that, the aspect ratio, or what cut it was but it looks like we did in fact get one once upon a time.
Posted by robotGEEK at 1:39 PM