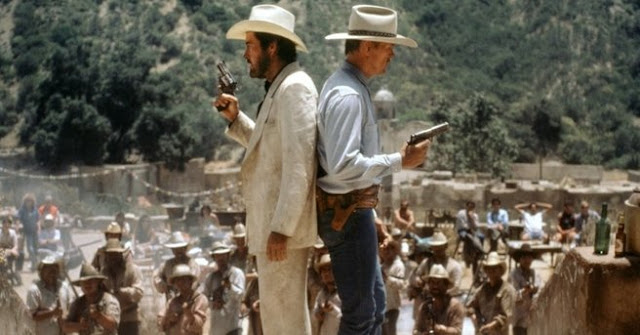 Writer/Director/Producer Walter Hill has made an insane amount of action classics in his decades long career, most notably as a director. While he hasn't done much in the last decade or so, it's in the 80's where he really flourished, knocking out classics like 48 Hours, The Warriors (though it was released in '79), Red Heat and Streets of Fire to name a few. Yet, considering how amazingly badass Extreme Prejudice (released in 1987) is, it's a largely forgotten film. Why? I have no idea. But the truth of the matter is that it's largely been dismissed, forgotten or flat-out unrecognized, which is a true shame. Whenever I encourage someone to actually see it, whether they've heard about it or not, they always leave with their mind blown, having just seen one of the toughest, grittiest and bloodiest modern day westerns ever and they can't believe they hadn't seen it until now. Most people don't even realize it's directed by Walter Hill, which says a lot about how under the radar this film really is. 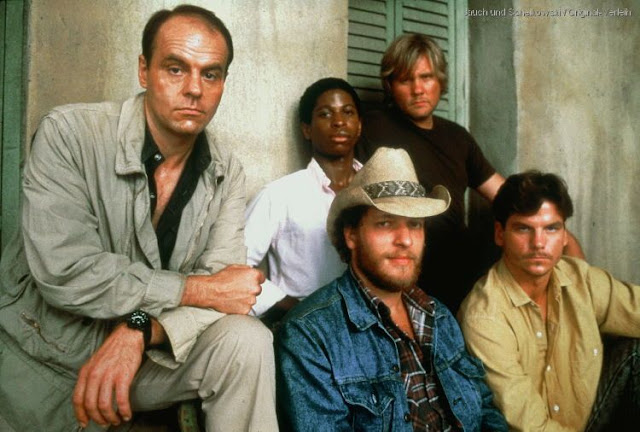 Let's forget, for a moment, the fact that it sports an impressive cast that includes Nick Nolte, Powers Boothe, Clancy Brown, William Forsythe and Michael Ironside, let alone a who's who of notable character actors you'll surely recognize. What's most impressive about this flick, aside from this badass cast, is how macho it all is. It's right up there with Top Gun and Predator in terms of that pure macho adrenaline, and it's a really hard and rare thing to accomplish. I guess The Expendables franchise would be another example; I just wish they were actually better. 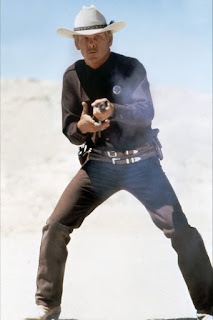 In the U.S. Extreme Prejudice has been released on Laserdisc, VHS and DVD. But shockingly, it's only available in widescreen on Laserdisc, with even the DVD being a really shitty full frame presentation and it's such a huge injustice to the material by not presenting it in it's proper aspect ratio. I mean, the visuals are flat-out stunning and there's really no other way to see this other than widescreen to fully appreciate it. Even today, we still have no news of a Blu-Ray release in sight, which brings me to this Japan release.

I had come across this on eBay a few years ago, and I would hold off on buying it because the $30-$50 asking price was a bit steep for a film with no extras. I guess I always hoped somebody would finally release this stateside on Blu, but that still hasn't happened. So one night I just pulled the fucking trigger and snagged this Japan release for $30 and I'm not sorry about it in the slightest.

While it doesn't offer anything in the way of extra's, and to be honest, I'm not that big a fan of the cover either, the film looks glorious in HD and in it's proper aspect ratio. I also realized something upon revisiting this. No matter how many times I've seen it, I never get tired of it. It's an amazingly "tough guy" film, that miraculously offers slick visuals while also looking gritty as all hell. Nearly every single frame is drenched in sweat (along with the actors), and the sunburned atmosphere and aesthetics really lend to an authentic modern western vibe that you don't see very often. 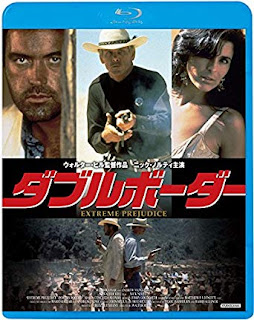 Is the film perfect? Certainly not. The plot can be a bit unnecessarily convoluted at times, especially when it all comes together at the end and you realize it didn't have to be so complicated, but that could just be due to the fact that a few subplots and storylines were edited out. I don't know. Still, it's a helluva great film with an incredible cast that still goes unmatched in it's badassery. But the film, even at the $30 price tag for the Japan Blu Ray, was one of my favorite film purchases and I don't regret it one bit.

While the film is available to stream on Amazon, there's no information on whether it's in widescreen or not. Still, it's a crime this film doesn't have a better reputation, either as an action film, or as a Walter Hill film. This film truly deserves an upgraded HD release on a physical here in the states. It's long overdue.
Posted by robotGEEK at 11:03 AM