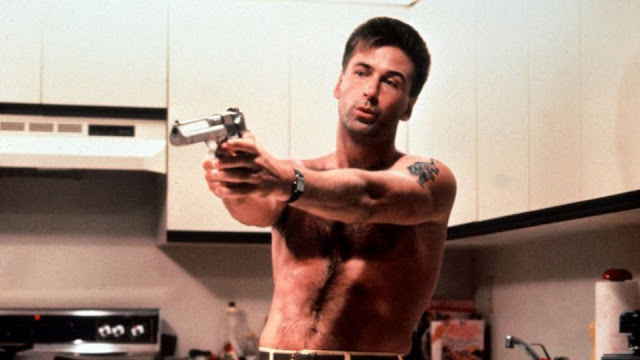 An Unconventional Caper That Delivers

I'm back. I guess I just can't stay away. I love movies so much and watch so many of them on a regular basis I feel the need to let some of you in on some hidden gems that you might not be aware of. But I think I'm going to change my format from here on out. I think from no on I'll stick to a "Short Form" review style, so that I can get more out in a timely manner. So let's kick things off with this under-the-radar film from 1990.

Like you, I've certainly come across this title at my local video store. I remember always thinking how crappy the cover was, and in any promotional material always seeing images of a shirtless Alec Baldwin, or that one image of him sitting in a bed with an uzi in one hand, and a wad of cash in the other. Other than that I knew nothing about it. Thankfully Hulu Plus has had this on their streaming site for a while and I finally took the plunge.

Miami Blues is great. It's also one of those films that is hard to categorize, much in the same way Miracle Mile, Into the Night, Joe Versus the Volcano, and hell, even Innerspace to some degree. And these are all incredible films, and the fact that they're nearly un-categorizable probably explains why they didn't do well, because how can you market a film that is hard to fit into a specific genre? The same can be said about Miami Blues, a film that came and went with very little attention, but has gained a cult status in the following years.

Part caper, part dark comedy, part thriller, part detective film, Miami Blues works as well for all the reasons it didn't do well financially. It's a very niche type of film that not a lot of people will understand, or "get", but if you can just go with the flow, you'll find that it's quite the pleasant surprise. Unconventional at it's core, you follow Alec Baldwin's just released from prison ex-con who immediately takes up his old ways upon release, but with more urgency, extreme and with higher consequences. On his trail is Sgt. Moseley (an excellent Fred Ward), an out of shape cop who knows he's got his man, but can't seem to connect him to anything concrete. The back-and-forth battle of wits between these two is what makes the film work so well, and combined with the film's unconventional approach, you have yourself a great time. 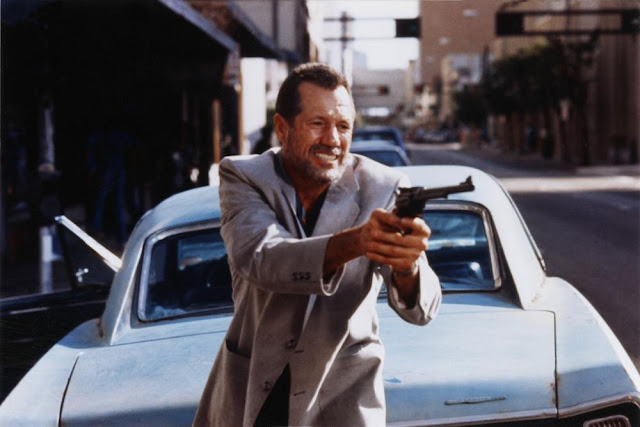 Baldwin does a great job at creating a totally unlikable character, and using brute force, intimidation and bully tactics to get what he wants. It's weird seeing him so thin and in great shape, compared to what we've grown used to seeing in the last 20 years. But it's Fred Ward (who also executive produced) who steals the show, as a somewhat bumbling sgt. who's always one step behind.

I discovered afterwards that the film's writer and director was George Armitage, who also did Gross Pointe Blank, which explains a lot about it's particular tone. It's based on a novel by author Charles Willeford, where they even attempted a tv series/movie in 2014 starring Paul Giamatti based on Ward's character Hoke Moseley. Sadly, I think that tv movie was intended as a pilot and it just didn't take.

The film carries a charm that is hard to define and describe. I really can't explain it. As I struggled to try and figure out just what type of film this was supposed to be, I couldn't help but fall in love with Fred Ward, Jennifer Jason Leigh, and the films odd tone. I never knew where it was going to go next and oftentimes blindsided me with what did end up happening next. For all of those reasons, Miami Blues deserves to be seen, or a second look if you've already seen it and just didn't connect with it before.
Posted by robotGEEK at 12:07 PM