Unintentionally Hilarious and Insanely Entertaining 80's Action at it's Best

How have I not seen this until now? Released in 1987, Steele Justice stars legendary bad guy Martin Kove, here in an attempt to make him a leading action star for the very first (and only) time in a big budget film that, despite it's budget, looks and feels more like a classic Cannon flick more than anything, and it's fucking glorious.

Martin Kove plays John Steele (get it?), a down and out ex-cop and ex-Vietnam vet who wanders from job to job with no clear direction in life. When an old Vietnam General and former enemy Kwan (Soon-Tek Oh), now a successful businessman and secret drug lord, and his son begin creating terror in his hometown, Steele must stop them. When they kill Steele's ex-partner and only friend, they sealed their fate. 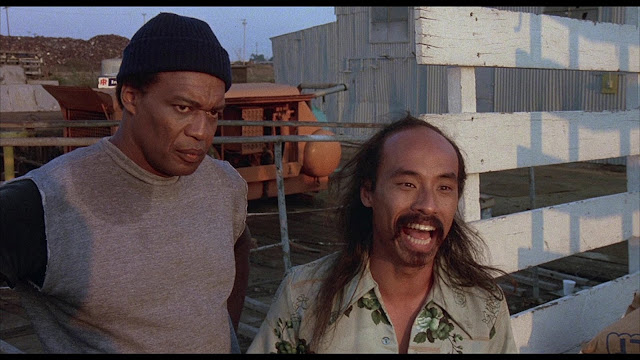 Steele Justice has so much going for it that I don't even know where to begin. For starters, the cast is just epic here, with a kickass roster of notable bad guy's who were mainstay's in the 80's showing up, most notably the legendary Al Leong in a much more prominent role than we're accustomed to, and of course Peter Kwong (Big Trouble in Little China, Never Too Young to Die), as the son of Kwan, who leads his fathers charge with a brutality that pisses John Steele off. Rounding out the surprisingly stellar cast is Sela Ward, Ronny Cox, Bernie Casey, Sarah Douglas, Shannon Tweed, Asher Brauner (American Eagle) and so many more. And of course, the one and only Martin Kove. I have to be honest and say that despite their best efforts, I just can't take Kove as the hero as he's made an amazing career out of playing bad guys. It's in his face too. Even when he's being charming and nice, his face betrays him in a way that no matter what he does or says, he just looks like a villain. Regardless, he was awesome, and unintentionally hilarious. I'm telling you, the cast is nuts, but in a purely delightful way.

Obviously played straight, Steele Justice is loads of unintentional hilarity in the best possible way. I'm saying this is easily one of our Bad Movie Night masterpieces, right up there with Never Too Young to Die, Hired to Kill, Mankillers, Strike Commando, Deadly Prey and Killer Workout. So much of this film doesn't make any sense, with so many of the decisions of the characters being so ridiculously stupid and defy all logical thinking that you just can't take any of it seriously. And then there are the moments that literally have no explanation and leave you confused and dumbfounded. I won't mention them to you here because it's best to experience them for yourself, but you'll know exactly what I'm talking about, and you'll more than likely say out loud "WTF??".  There's even a totally out of left field epicly WTF? music video sequence that will blow your mind halfway through.

Steele, for his part, is a treasure to watch. It seems so effortless for Martin Kove to play this unlikable character, who's valiant attempt at being charming comes off as creepy, and he really puts his all into it. The moments when he yells out in anger (of which there are many) during any number of shootouts is pure gold (think Reb Brown in literally every movie he's in).

Steele Justice, written and directed by Robert Boris (Frank & Jesse), is a Bad Movie Night masterpiece of the absolute best kind. Unintentionally hilarious, oftentimes strange, full of an incredible list of actors that surprised me at every turn, solid action, absurdity aplenty, and Martin Kove turning in easily my favorite performance from his entire career. He may not be leading man material, but he sure does try, really hard, and it's a beauty to watch. If Steele Justice is anything, it's 100% entertaining from start to finish and you'll be hard-pressed to find a better time in the 80's action department. 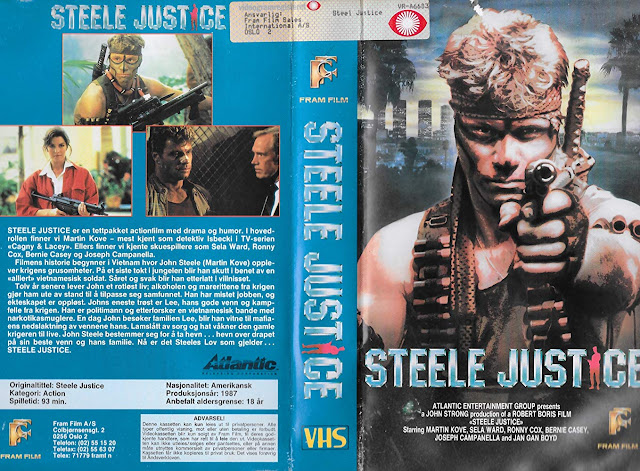 Posted by robotGEEK at 3:31 PM