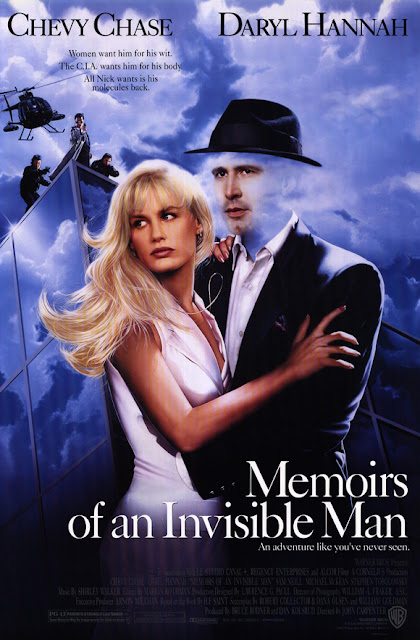 If there was any film from John Carpenter's second half of his career that felt the least like a John Carpenter film, this is it. But that doesn't mean it's not just as good as any of his other stuff. In fact, I consider it one of his last great films, and a criminally underrated and well-crafted thriller.

Nick Halloway (Chevy Chase) is a lazy, arrogant and successful yuppie lawyer living the high life while putting in as little effort as possible in his job. When a freak accident renders him invisible, he's faced with a shocking identity crisis, has to learn to cope with this new condition, and try to reconnect with a new flame, all while an evil CIA agent (Sam Neill) is hot on his trail.

This film was a passion project for Chase (at least, that's what I remember reading in an article way back then), and as you may or may not know, this film flopped, big time. Ultimately, it ended up losing millions of dollars, not even coming near breaking even on it's budget. I believe it was intended to start transitioning Chase into more serious roles, and here, as his first leading man role in a more serious film, he does a magnificent job. But see, I think the problem right from the beginning was that people just couldn't disassociate him from comedy, and so most people believed this was in fact another comedy. But they couldn't have been more wrong. Yes, there are little funny bits here and there, but if anything, it's mostly a thriller, with healthy doses of action, drama and science fiction thrown into the mix.

MoaIM is first and foremost a thriller, and a very good one at that. Chevy Chase does not crack jokes, is not snarky, and is not falling down for a laugh. Here he plays it straight, and I have to admit, he does a damn fine job. Though I couldn't stop staring at his weird haircut, it's completely obvious he went through great lengths to prepare for the sometimes physically demanding role. He's tan for one, which is kind of odd, but he's also in pretty good shape, something you can't help noticing during his one and only nude scene in his career. So you can tell he took the role seriously, at least physically. But then you have to consider the pains, and sometimes torture, he went through for the films grueling special effects, which were highly advanced and state of the art at the time. Hell, I think they still hold up amazingly well today, and come off as better and more realistic than most of the CGI stuff they try to pull of these days. They're damn impressive on a technical level.

By this time, John Carpenter had a string of bombs (which have since become insanely worshiped cult classics). Because of this, he went the independent route with his last two films, Prince of Darkness and They Live, which performed moderately well for theatrical films, but nowhere near the status of a success. They did however, turn a decent profit on their small budgets. This would be his first directing gig in 4 years, and his first film in a long while that he didn't have some creative input in the creation, but rather a director-for-hire gig. It's also the first time he didn't include "John Carpenter's" before the title, something he had always done with all his films, even if he didn't write them himself. Though this ended up being a huge dud for both Carpenter and Chase, Carpenter would go on to make the the moderately entertaining Body Bags (some people really enjoyed it, I didn't) the next year, followed by In The Mouth of Madness, his last great film. Chevy Chase on the other hand, continued to deliver mediocre comedies until he eventually fell into DTV territory.

When you think about it, there really aren't a lot of "Invisible Man" films. Right off the top of my head, I can only think of less than a handful. While I do love the original Universal classic horror film, there really hasn't been a decent once since then. Paul Verhoeven's Hollow Man was a bitter disappointment, and I honestly can't think of any others that were possibly made after. So this one will always go down as my personal favorite, and unapologetically, I consider it the best Invisible Man film to date.

I think one of the things that surprised me about this, other than the fact that it was fantastic, was that it's easily one of the only films that doesn't carry the John Carpenter trademark vibe. It doesn't look or feel like a typical Carpenter film. In fact, if the "directed by" credit wasn't there, you'd never know and you never would have guessed. Most people still don't know this is a Carpenter film. And some of that falls onto the score. Typically Carpenter either scored his own films, or if he didn't, they contained a very synth sound, with this film taking a very dramatic departure from that norm, instead utilizing a big, loud and bombastic score, typical of big budget films like this. It's just not something you're used to in a film directed by John Carpenter.

This really is a fantastic film. If you can just get passed the fact that Chevy Chase is not trying to be funny, and if you can accept him as a serious leading man, then you'll have a great time with this one. He turns in a solid performance in this film, right down to the completely unnecessary narration. But because of his deep low voice, it does end up adding a special something to the mix tonally, even if logically, the voice-over narration doesn't. John Carpenter may not be displaying his specific visual aesthetic, but he does delivery a solid and well structured thriller, easily making this the best and most enjoyable Invisible Man film to date.
Posted by robotGEEK at 9:33 AM