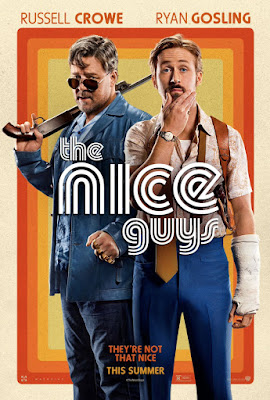 When I learned Shane Black was going to go back to his roots with an old-school style action/buddy comedy, I was more excited than most. Black virtually invented the action/buddy genre with films like Lethal Weapon, The Last Boy Scout and The Long Kiss Goodnight. While he was merely a writer for those films, he would get his first directing gig with 2005 Kiss Kiss Bang Bang, which he both wrote and directed himself, proving his talents carried over into directing, which he continues to do sporadically. So when it was announced he'd be doing an action/buddy comedy set in the 70's and he would be directing and writing himself, well if you grew up on these movies in the 80's, then you knew this was a genre that really hasn't had success in a very long time. Nobody makes them the way they used to anymore.

The weekend this film opened, my partner in crime and I got our tickets and saw it on a Saturday night. Now you should know I never pay full price for a late feature, because it's just too fucking expensive. I refuse to pay outrageous prices. But I knew that this film probably wouldn't be a big hit, so I wanted to support it as much as possible. Of course, the theater was only maybe a quarter full, which was sad. But let me tell you. The next 2 hours proceeded to be 2 of the most entertaining hours I've spent in a theater in quite some time. The Nice Guys was awesome. Just the type of film we always hope they can make again; one that we've been missing for a good 20 years.

What makes this film a cut above the rest is that it's genuinely funny, and doesn't rely on "stupid" to make you laugh. It's hilarious for all the right reasons at just the right moments. It's also a detective story, sprinkled with some solid action throughout. So you kind of have a bit of everything for your enjoyment. What makes it even more "authentic" is that it's set in the 70's, giving it that extra air of authenticity and legitimacy. Sure they could have set it present day, but it's just more fun to see the disco era recreated so well.

While I never would have pictured Russell Crowe (looking the heaviest I've ever seen him) and Ryan Gosling as an action/comedy duo, I have to admit their chemistry is undeniable. Plus, who would have thought that Gosling could actually be funny? I didn't! I don't think I've ever seen the guy "act" as much as he did in this film and come off as likable before. And it just seems to come off so natural too, which was another shock. While Crowe plays the more hard-edged and serious of the two, Gosling plays off that seriousness by being way more animated and the result is pretty hilarious. I liked these two so much together that I hope that Black continue's to make more of these down the road, maybe with each film set in a different era like the 80's and 90's since they seemed to tackle the 70's so effectively well.

Which brings me to another positive note. Shane Black is an insanely talented director. With only 3 directing credits to his name to date, with this being his third, he displays an even-handed old-school charm. He keeps things simple, but neat. Never once falling into the lame handheld bottomless pit of "quick and easy" filmmaking, which was a breath of fresh air. This film is slick, in an old 70's kind of way. He doesn't superstylize anything, instead letting the art department, production design, and wardrobe department do it for him, resulting in one helluva great looking film. Everything looks and feels authentic, and not fake or that it's trying too hard.

On the flipside, The Nice Guys is also a sad reminder of why they don't make these types of films anymore. As of this post, it has been out for over a month already, and it's only amassed a box office total of $35 million on a $50 million dollar budget. I can't explain it. On the one hand I can't imagine how or why this film could possibly cost $50 million dollars when it's a fairly simple film to make. I'm guessing Gosling and Crowe's paychecks weren't cheap. And on the other hand, here we finally have a film that brings back that throwback feeling 100%, the kind of film we've been aching for to be made again, and still, nobody went to go see it. It's frustrating. I don't know how people expect filmmakers and studio's to attempt anymore of these if they don't go out and support the few that we do get.

I really can't praise this film enough. It's the perfect escape if you're tired of all these big overblown flops. It's the kind of film you've been waiting for if you grew up with films like Lethal Weapon and The Rookie. It's got action, which kicks ass. It's funny as hell, in a legitimate way, without pandering to slapstick. It's smart when it delves into the detective angle, and most of all, it's easily one of the most fun film experiences you will have if you just like to watch a good movie. Since it's too late now that this has come and gone from theaters, support the shit out of this when it hit's the home video market. Rent it, buy it, stream it, but "PAY" to do it so that they will make more!
Posted by robotGEEK at 12:43 PM