I've noticed something about myself recently. Being that I'm now 40 years old, I've found myself really being drawn more to the films of Clint Eastwood and Charles Bronson in the 80's, rather than the films I used to obsess about from Van Damme, Seagal, and Chuck Norris. Well, Norris could really fall into both groups depending on the film. But what I'm realizing is that I'm identifying more with the normal guys, the Bronson's and Eastwood's. Whereas the Van Damme's and Seagal's seem to come off more like superhero's. I liked that Bronson is older, and is but a mere mortal man. One who gets hurt, who tires, and doesn't know any type of martial arts. He's tough, in an old school way. Same goes for Eastwood, and I am having a great time digging through both their output from the 80's.

Don't ask me why, because I don't know. But I've never seen any of the Death Wish films. Gasp! Except for Part 3, which was only maybe a year or so ago because I heard how nuts it was. And it was. So recently, in my classic Bronson and Eastwood kick, I decided to just watch the damn film series already. Why haven't I done it yet?! It's from Cannon for God's sake! I wasn't sure if they were good, so I didn't want to blind-buy, but lucky for me, the first 2 films are on Hulu Plus, so now I'm finally getting some use out of my monthly subscription that I often seem to forget I have. 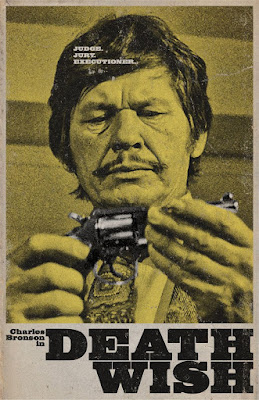 First up; Death Wish. I must say. Death Wish was a revelation. It's hard to know whether to call it a revenge flick or a vigilante flick, because it's both. I think what surprised me the most was how violent it was, and how well it was made. I'm not familiar with Michael Winner as a director, other than knowing he's done the first 3 films in the franchise, but he seems tailor made for the gritty realism of 70's New York City. Strange considering he's from London. But somehow, some way, his specific style works, and it works insanely well. Mid 70's New York looked both disgusting and beautiful at the same time.

Bronson is a badass, plain and simple. His ability to be both cold and driven is what gives his take on Paul Kersey the depth he needs, and to be believable. So good is he in the role that I couldn't possibly imagine anyone else playing the part. Of course that will change now that the remake has just been announced with Bruce Willis set to star and Eli Roth directing. But hell, I can't imagine the ruckus this film raised way back in 1974 with it's unflinching depiction of violence and rape. But it's almost like it needed to be that shocking, so that you can see why he is driven with the need for vengeance.

What I found most enjoyable, besides the violence, is how everything just works almost perfectly in unison to create this world. All the right talent is here at just the right moments of their career's, and the result is one of the most violent, most entertaining revenge thriller's ever made. It's gritty, unflinching, stylish depiction of revenge in New York City circa the mid 70's makes this a near masterpiece. Don't be like me. If you haven't seen this yet, you better get on it immediately. 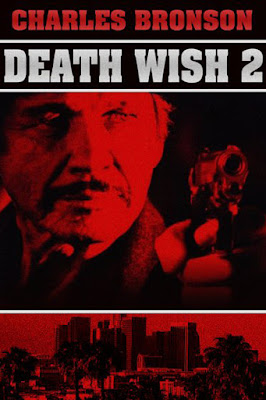 With how successful Death Wish was, I'm surprised it took them 8 years to make a sequel. Death Wish II takes place this time in Los Angeles. After Kersey's (Bronson) wife is murdered and daughter raped in the first film, he moves with his daughter to L.A. to escape the violence of New York. Only violence seems to follow him everywhere as this time, both his daughter and maid are raped and murdered. Again, Kersey seeks revenge on the gang, and again gains the attention of Det. Frank Ochoa (Vincent Gardenia) who travels to L.A. to try and stop Kersey.

I've heard a lot of people say that Death Wish II is more or less the same film as the first. While that's true to a certain extent, I have to disagree. What I noticed almost immediately is that this sequel just barely teeters on the edge of being crazy, right before Part 3 goes head-on into insane. There are so many moments that elevate this above the first film in terms of sheer audacity, violence, brutality, and just pure raw energy that I found myself enjoying this one more than the original. Mainly though, because it is way more nuts than I was expecting it to be. Not as nuts as the insanity of Part 3, but boy it gets close.

Director Michael Winner again returns, bringing his distinct visual flavor to the film, but one of the surprises that I was not prepared for was the fact that Led Zeppelin's Jimmy Page provided the score, and it's pretty fucking phenomenal. Kind of bizarre and not really the sound you'd expect from a film like this, but it works effectively well. So well in fact that it pushed the entertainment value so much further in this for me. It punches you in the gut in the best possible way.

I've recently heard that Shout! Factory will be releasing this in late July that will feature both the Theatrical Cut as well as the highly sought after Unrated Cut. If this movie could possibly get any more violent, then I'm in. I can't wait.

Death Wish II is a slightly better version of the first one, because it pushes the envelope in nearly every direction even further to the point of nuts, as if it's trying to prepare you for the insanity of the next sequel to come after.

There are countless DVD and Blu ray releases of these films. But you can also currently stream them both on Hulu Plus if you don't want to actually purchase them just yet.
Posted by robotGEEK at 10:18 AM