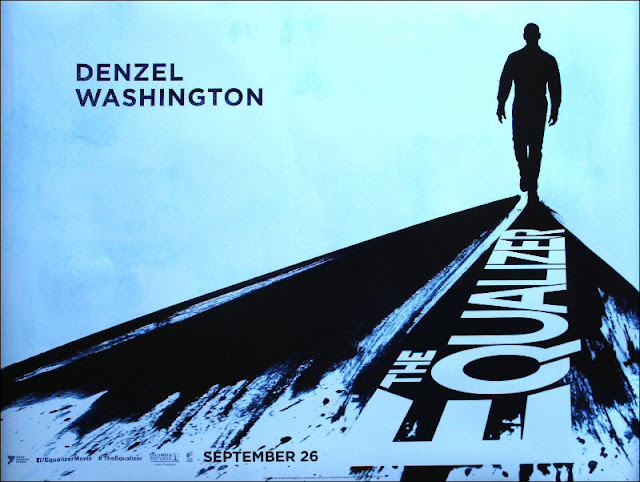 After finally watching the excellent Training Day for the very first time, I was immediately struck with the feeling that I need to either see for the first time, or revisit past Antoine Fuqua films. First on that list was The Equilizer, a film that didn't really grab me when it first came out. At least not enough to go actually pay good money to see it in theaters. It may just be the fact that I grew up on the original show starring Edward Woodward in the 80's, and the fact that we have yet another remake that looks to dramatically change the formula again didn't help. So I passed on it initially. After finally seeing it, I wish I hadn't.

In short, Antoine Fuqua's The Equilizer is fucking awesome. In fact, I'd put it right up there with John Wick. It's just as brutal and entertaining as that film was, just without the flashy neon bright colors. Fuqua directs with a slick gritty/noir vibe that was hard to see in the trailers, but it's evident in all it's glory when you see the film. In fact, the more I think about it, Equilizer and John Wick could literally go toe to toe because they both hit virtually all the same beats, even when it comes down to why the two leads come out of retirement to avenge. Same plot, essentially, but both with varying degrees of success that make them both uniquely different.

While first thrown off by the casting of Denzel Washington in the lead, my fears were quickly put to rest because really, he just nails the role and kicks all kinds of ass in this. And you know, he's not trying to be Edward Woodward (obviously), and essentially, this is kind of a prequel to how his character becomes known as The Equilizer. So don't go in expecting to see a sophisticated brit who dons a trenchcoat and you'll be okay. Personally, I enjoyed where the story went, and how his character was fleshed out, albeit rather slowly. But that's a good thing, because it's the mystery that keeps you invested, and let me tell you, the payoff is well worth it.

Director Antoine Fuqua again displays his mastery of action sequences. Seriously, why is his name not right up there with those of say, the early career's of John McTiernan and Renny Harlin? He's just as good as either of those guys, if not better. And unlike McTiernan and Harlin, who I happen to love, he's consistent. That's not something you can say about a lot of today's, or even yesterday's, action film directors, who tend to change up their style and aesthetic with every film project. At least in Fuqua's case, all his films follow a similar stylishly streamlined aesthetic. No half-assed shaky-cam nonsense.

The Equilizer is a reminder that I need to continue to support new action films, that they're not all crap. The  majority of them are, but every so often we get a gem like this, that reminds us that they still can make great action films in this day and age. Crazy, right???
Posted by robotGEEK at 10:14 AM