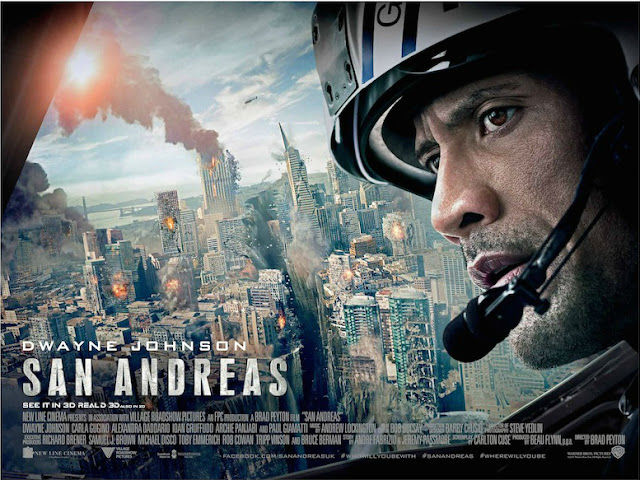 I'll be honest, I really had no desire to see this one. I found nothing about the trailers to be enticing, and the poster was even worse. Sure I love me some Rock, but we all know his stuff is hit or miss. While I do admit that I didn't pay that close attention to the trailers, from what I did see, it just looked like another over-CGI'd mess. Sloppy, fast, tacky, and another collaboration between The Rock and his Journey 2 director Brad Peyton. If the film 2014 showed us anything, it's that big budget CGI-fueled disaster pics just aren't what they used to be. You can have all the money in the world to make them, but to actually create intensity and chaos realistically through pure CGI, well.....it just doesn't carry the same weight.

As I recently browsed through what Redbox had to offer, I came across this and thought "why not?". Boy I'm glad I took the plunge because guess what? I fucking loved it. No lie. It literally does everything it sets out to do, in a much better way than I expected, which ultimately put my fears to rest. It's the same old story. Guy is going through a divorce, and when disaster hits, in this case in the form of a huge mega-earthquake, he must find a way to get to his teenage daughter and ex-wife to save them. Minor sub-plots aside, what I liked about this is that it starts rather quickly, without all that unnecessary fluff they try to hammer into these films to fill the run time. The set pieces are impressive, and to my surprise, all the harrowing disaster-ness is done really well. Where I found the effects work to be too hacky in the trailers, I found to be quite realistic in the final product. The only time I really noticed it being schlocky was in one particular sequence involving water.

Whether Dwayne Johnson is being in something serious, or silly, I have to give the guy credit; he brings his A Game to every single role he's in. He never half-asses anything, so whether I actually like a film of his or not, I respect the guy as one of the hardest working actors in the business. In this role, he brings his usual swagger, and it seems like a perfect fit for him. And as is the case for these big budget disaster pics, there's a large who's who of supporting actors that all bring that extra something to the table. Unfortunately we don't have that 1 big surprise cameo or bit part from someone big time. That would've been icing on the cake.

While disaster pics were big business more than a quarter century ago, they continue to be made, yet less enthusiastically and less regularly, with 1 every few years or so. Despite this, they still don't seem to be made well. While Roland Emmerich has been called the "King of the Disaster Epics", he doesn't seem to make them all that well, at least when you compare them to some of his stronger films earlier in his career. With films like 2014 and even his version of Godzilla, for example, there's always room for improvement. He's been known to get these made fast and cheaply, but "quality" is never a word used when describing his work unfortunately. I am looking forward to his Independance Day sequel though, so hopefully it will be a return to form for the big budget maestro. But, if San Andreas is any indication, it seems that director Brad Peyton may be able to fill those shoes as well.

San Andreas is pure popcorn/disaster epic/eye candy. It's a ton of fun and if you can shut your brain off and not give into asking questions like "why do the seismologist's and scientists have power when the rest of the city is virtually without electricity?", then you'll enjoy this big budget disaster pic that hits all the right notes, no more, no less.
Posted by robotGEEK at 10:00 AM