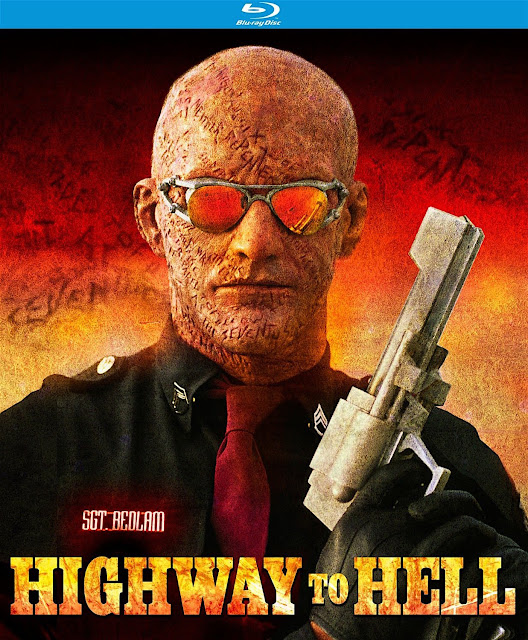 Ate de Jong's Highway to Hell is one of those low-budget obscure films I remember seeing often in my local video stores. I remember that terrible cover, and I remember actually renting it a time or two, mainly because I knew the guy who did it also did Drop Dead Fred. My memory is pretty fuzzy on whether I actually liked it or not, but what I do recall was it was littered with an odd assortment of cameo's, with Gilbert Godfriett as Hitler continuously yelling he is not Hitler being burned into my memory for some strange reason. Other than that, I really don't remember anything about this, and I honestly forgot about it. That is until it recently got the DVD/Blu ray treatment, it's first official release in any form other than VHS in the U.S., and the first time being able to see it in it's original aspect ratio.

So I invited a bunch of my movie friends over and threw this baby on. None of them had even heard of this before, and the one that did couldn't remember a thing about it. So we all went into this blind, which is usually the best way to do it.

First thing I need to say is that Highway to Hell is insane. Literally. This film is just nuts, but in such
a chaotically fun way. Highly absurd and ridiculous, with a slight hint of tongue-in-cheek humor that's hard to pull off effectively, yet it works here. You won't laugh out loud or anything, but it's silly premise, structure, and end result works better than you expect it to. If you're a fan of films like Hell Comes to Frogtown, then you'll most certainly enjoy this one as well. While there's not a lot of "action" per say, it moves along at a brisk pace with enough "odd" cameo's, and wtf? chaotic moments that it's a helluva lot of fun from beginning to end.

I was most shocked to learn that none other than Brian Helgeland wrote this. If you're not familiar with his work, he's the guy responsible for big Hollywood films like L.A. Confidential, Mystic River, Man on Fire, Payback, and a slew of others. But before this film, he had also written 976-Evil. So I guess you gotta start somewhere. You'd just never guess the same guy came up with this WTF? insanity.

Then there's director Ate de Jong. He's been directing since 1976 (The year I was born), and still continues to direct today. But 1991 was the year he directed this and Drop Dead Fred, which both happen to be his most well known works. With the exception of an episode of Miami Vice, none of his other films ring a bell. He does alright with the material he's given. I think I would have liked to have seen more style, or more of a fluidity in his camerawork, but it's not bad. Just not very inspired visually. But, I will add that that may be in keeping with it's low-budget/post apocalyptic vibe. So it could be deliberate for all I know.

The blu-ray is a must own. I've seen it fluctuate sporadically in price here and there, but honestly, it shouldn't be more than $20 with shipping. It comes with the film in a solid digital transfer and it was nice seeing it in widescreen for the first time. The highlight for us was an interview with makeup/fx artist Steve Johnson. This guy. He's a trip, and his candid interview is well worth the price of the blu ray alone. Do yourself a favor and watch it following the feature. You'll be glad you did.

I'm not saying it's a perfect film, but it sure is a fun one, especially watching with a group and some alcohol. It's highly absurd, silly, sometimes comical, sometimes awesome, and all around fun.
Posted by robotGEEK at 2:02 PM