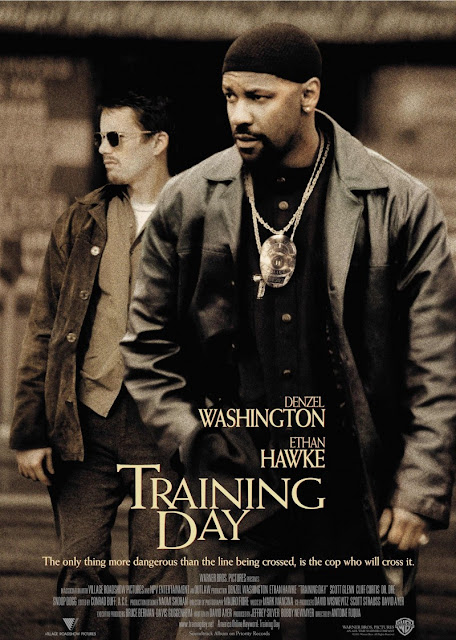 Wow. That was the first word that came out of my mouth when I finished this gritty crime drama masterpiece. I honestly can't tell you why I hadn't seen this film until now. Even knowing how badass Antoine Fuqua is as an action director and the fact that Washington won an Oscar for his performance here somehow never pushed me to actually watch it. Crazy, I know. You'd think this was right up my alley, and you'd be right. I'm just stupid because it took me 15 years to finally get around to this.

Written by David Ayer (Fury, Suicide Squad) and directed with gusto by Antoine Fuqua (The Equilizer, Olympus Has Fallen, Shooter), Training Day is a textbook example of how to correctly formulate dramatic tension, suspense, and action. In fact, it should be required viewing in film school. It's so fucking good, and incredibly bleak and intense, even when you "think" you know what direction it's heading.

For the most part, Training Day plays out pretty much as you expect. The trailer pretty much lays most of it out for you, and what the trailer doesn't provide, you figure out rather quickly, even down to the finale. But that doesn't mean there aren't any surprises along the way, because there are plenty. But that's for you to find out for yourself. To sum it up, it doesn't really re-invent the genre, but does such a damn good job at giving us a cop/thriller filled with an immense amount of tension, and made with an intensity you don't come to expect from these types of films anymore, this taut thriller is a benchmark in the cop/thriller genre and that's thanks to the combined forces of both Antoine Fuqua and David Ayer. Writer David Ayer came onto the gritty cop scene with a bang on this one, and so far, he's proven himself to be quite good and consistent in his writing, even though he's hit or miss with me as a director. I hated Sabotage, but I liked Fury, so you never know. But, every time I see a new Suicide Squad trailer, I get excited.

I've always been a fan of Fuqua as a director. The guy, even though most of his films are solid, just doesn't get the credit or respect he deserves. Sure, you could say he doesn't carry a definable "style" like say Tony Scott or Michael Bay, but the guy is consistent in terms of quality, and each film he directs is stylish, even if that style is hard to define in general terms. I guess what I'm trying to say is that they all look great; some more than others. You won't find a lazy or incompetent looking film in his entire filmography, and that right there says a lot when most seem to switch up their style so frequently you can never identify who's directing what anymore. Not like in the old days, before the shaky-cam/handheld revolution. Fuck that. Fuqua liked to keep it old school, and for that, I love him.

Training Day was a HUGE surprise. I mean, I knew it would be good, but I honestly didn't expect it to be this good.
Posted by robotGEEK at 11:14 AM