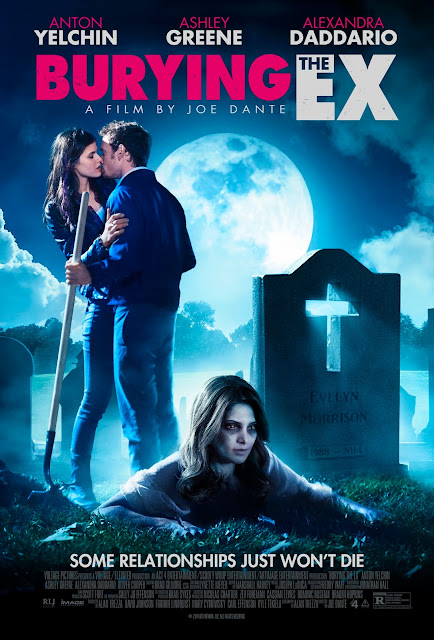 This film has been sitting in my Netflix list for what seems like ages now. Not because the cover was awesome or anything, because it's not. In fact, it's pretty damn tacky if you ask me. But because I knew this was a new Joe Dante film, I figured I'd eventually get to it someday, and that day was a lazy Sunday afternoon last week. As it turns out, this was just what we were needing after the intense experience of watching Training Day for the very first time.

Max (Anton Yelchin) is a horror buff working retail and living with his vegan green-friendly girlfriend Evelyn (Ashley Greene). One day he meets Olivia (Alexandra Daddario), a like-minded horror enthusiast who seems to be the most perfect woman Max could ever want. As Max tries to work up the courage to break up with his girlfriend (who he has nothing in common with), to pursue Olivia, a freak accident kills Evelyn. As time goes by and Max feels comfortable enough to start pursuing Olivia, Evelyn returns from the dead, intent on maintaining their relationship at any cost, much to Max's dismay.

While Joe Dante's latest doesn't bring anything new to the table, or is even really all that great for that matter, what it is is fun and entertaining when you're looking for something "light" and "fluffy" to fill your time. I have to admit, I really enjoyed this, but at the same time, I couldn't imagine watching this alone and enjoying it as much. This really seems to work better while watching with a date or significant other. That's the kind of movie this is, and in that regard, it was cute, funny, and just the right kind of light-hearted fare we needed after an intense 2 hour experience watching a hard-edged cop thriller. While it doesn't really offer anything that would make it easily identifiable as a Joe Dante film, his love of classic horror is seen and felt throughout. The effects work is good, the production is decent enough, and Dante directs with Made-for-TV vibe that the film just can't ever shake. If anything, that would really be this films only big downside, that it looks like any Joe "Somebody" could have directed it, and not the once great Joe Dante. But, what really elevates the film above average is the standout performances by everyone involved, namely the ever reliable Anton Yelchin (Odd Thomas, Star Trek), and the impossibly cute and criminally hot Alexandra Daddario. While the entire film is filled with great performances all around and spot-on casting to boot, it's Yelchin and Daddario's performances as the love-struck Max and Olivia that really shine. The chemistry between these two is undeniable, and you really, really want things to work out between this perfectly-matched pair. Too bad the whole zombie ex-girlfriend thing is really mucking things up.

The film is mindless, silly fluff, yet it's so endearing and charming at the same time. You stay invested, and though it can never really shake it's PG-13 vibe, it's fun, and if anything, something to watch with your significant other that's cute and has some clever horror elements that act as both a homage and a parody to classic monster movies.
Posted by robotGEEK at 9:22 AM