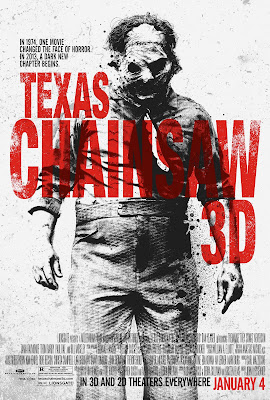 I for one have never been a fan of all these remakes in the last 10 years or so. I mean, it's gotten kind of ridiculous when you hear almost on a daily basis that almost every film you loved in horror as a kid in the 70's and 80's is being remade. It's almost to the point that you just expect anything you ever loved to get the "remake" or "reboot" treatment these days, which is just sad. I mean, right off the top of my head I honestly can't think of a single remake that I actually enjoyed, except for Fede Alvarez's Evil Dead and the Chainsaw films. Evil Dead will be another post, so I'll get into that one another time. But shockingly, I've always found something to like in all the Chainsaw sequels, reboots and remakes, except for Kim Henkel's horrible Texas Chainsaw Massacre: The Next Generation (1994).

So let me just go down the line with quick little blurbs on the series before I delve into this new installment.


The Texas Chainsaw Massacre (1974) Writer/Director Tobe Hooper knocks this one out of the park and created one of the most iconic, bleak, surreal and nightmarish horror films ever made. I think what works in it's favor is it's almost documentary feel, yet Hooper is able to pull of some truly inventive and downright brilliant and imaginative shots throughout. One of the best horror films ever made.

The Texas Chainsaw Massacre 2 (1986) Man, I'm just still not fully on board with this one. You really have to be in the right kind of mood and know what you're getting into to enjoy this one, at least for me. Even then, I find it tedious, boring and even annoying most of the time with it's odd vibe, Bill Moseley's over the top performance and constant yelling banter between the Sawyer family that unless you watch it with subtitles, you can hardly ever understand what the hell they're saying. Here Hooper decided to do something completely different "on purpose" and depending on your taste, it either works or it doesn't. For me, it doesn't. It just gives me a headache more than anything. It's got great effects by the one and only Tom Savini, and amazing set design and production value, but overall I just don't dig it. Hooper offers some nice camerawork though, and you can always count on Dennis Hopper to deliver the crazy.

Leatherface: The Texas Chainsaw Massacre III (1990) I've always considered this particular entry one of my favorites. For me, this feels more like a true Chainsaw film in look and tone. I've always thought last minute replacement director Jeff Burr did a phenomenal job with the limited resources and support he had. Still one of my favorite horror films to this day.

Texas Chainsaw Massacre: The Next Generation (1994) Not even gonna go there.

The Texas Chainsaw Massacre (2003) Like with every other horror remake, I rolled my eyes at this one. Didn't even go to the theater to see it. But when it hit DVD, curiosity got the better of me and well, what the hell, I actually liked it. Never been a big fan of Marcus Nispel's kinetic hand held style of filmmaking, but here it seems to blend perfectly with the subject matter and all in all, he pulls of some impressive shots and camerawork. I also thought Andrew Bryniarski's hulking Leatherface was just badass. Some impressive gore and effects and cast sealed the deal for me on this one.

The Texas Chainsaw Massacre: The Beginning (2006) This prequel to the remake 3 years before was another big surprise for me. Though I didn't really feel we needed to know where Leatherface came from or how he came to be; it sort of takes away a lot of the mystique for me, I just couldn't get over how much I enjoyed director Jonathan Liebesman's work on this one. Some truly haunting and visually striking imagery make this a standout for sure. We also get Bryniarski returning as Leatherface, which is always a plus.

Soooooo, here we are now again with this new entry. Except, instead of following along the storyline of the reboot, this film aims to be a direct sequel to Tobe Hooper's original film in 1974. In fact, the film begins immediately after the closing scene from that original film. Now, I don't know about you, but I think it takes a lot of balls to try, almost 40 years later, to make a film as a sequel to that iconic film. So you know, despite some massive plot holes, major inconsistencies and a truly fucked up and nonsensical timeline, I enjoyed this one quite a bit, which also surprised me because I honestly had no desire to see it for some reason.

What works? Overall, for me anyway, most of it. It reminded me of old school horror, circa the 80's and 90's. Too many times these horror films adhere to the new breed of horror filmmaking; the quick-edit/shaky-cam bullshit that I loathe. In this case, the film looked good, filmed with an even steady hand and no handheld camera bullshit. In the beginning of the film, we are also treated to a plethora of cameo's from the first 2 Chainsaw films. Why were they there and where the fuck did they come? Who knows?! Another one of this films many inconsistencies. But whatever. Cool to see Gunner Hansen, Marilyn Burns and Bill Mosely chewing up a few scenes. Despite some CGI work, though limited, the effects work in here was awesome. Glad to see they went old school for the most part.

What doesn't work? Where do I begin? The timeline is all screwed up and makes no sense if you really put thought into the events, the years and ages of the people. It's almost laughable in a few scenes. The 3D was just completely unnecessary. I saw maybe 3 or 4 shots, outside of the amazing opening sequence with footage from the original film that had been beautifully converted to 3D, that actually needed 3D. The other 98% of the film didn't need or utilize it at all. So it just felt like another gimmick to squeeze a few extra dollars out of the moviegoing public who wen to see this in the theater. The last 20 minutes. Oh dear lord. Ridiculous. Just plain ridiculous. So much so that it almost ruins the entire experience for me, but thankfully I felt the other 3 quarters of the film were strong enough to overcome the final act. But geez, it could have easily gone the other way and ended up making me hate this. That's how silly and ridiculous that final third act is. Buuuuuuut, overall it was enjoyable. Much more so than any of the other slasher remakes/reboots like Friday the 13th (which actually wasn't that bad), A Nightmare on Elm Street (unnecessary) and Rob Zombies Halloween films (unnecessary). I think had Zombie taken a different stylistic approach to his Halloween films, like say his vastly different and superior visual flare of Lords of Salem, we would have had much better Halloween films. But that's just me.

I suppose I felt the need to give this new Chainsaw film a few positive words, as most of what I have heard has been bad, or just about that ridiculous ending. So if you can stomach that last act, I think you'll find a solid old fashioned horror film with more to like than hate.
Posted by robotGEEK at 9:50 PM