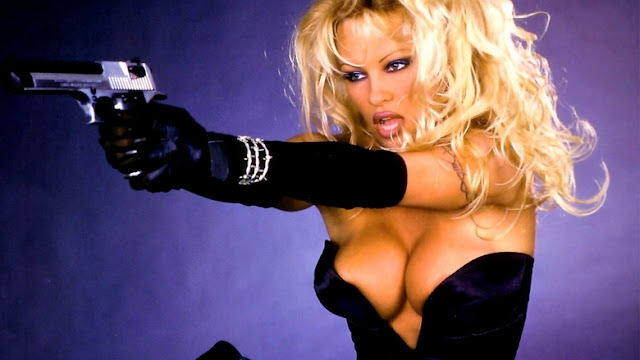 by robotGEEK
Recently, I dove hard into the Hulu original series Pam & Tommy, which chronicled the tumultuous relationship between Pamela Anderson, Tommy Lee, and their infamous sex tape. If you haven't seen it (the show I mean), I highly recommend it. It's an absolute gem of a show. Trashy, riveting and a ton of fun from start to finish, full of shocking moments and really great performances. I just loved the tone of it and it's such a wonderful look back into the 90's. But with that series, I was reminded of Anderson's attempt at breaking into big budget mainstream Hollywood with her depiction of the Dark Horse comic book character. Sadly, the film didn't ignite her film career the way they had hoped, and ultimately it ended up a flop. What makes matters worse is that the release of the film coincided with the unauthorized release of her sex tape and while some will say that the sex tape derailed her film career, the reality is that Barb Wire just isn't a very good movie.

I was honestly hoping for a good bad movie, or an entertaining one at least. I mean, I know it didn't do well, but I know that Pamela had a lot riding on it, despite the bad timing. I knew it was directed by famed music video director David Hogan (Most Wanted), marking his feature film debut, and I was honestly surprised at how badass the supporting cast was. But more than anything, I was curious to see why nobody ever talks about it. Surely there's "something" to like here. Was it literally just bad timing tied to her sex tape? On the surface, it has all the right ingredients and it should have been a blast, even if it was unintentionally bad. So I intended to find out.

While there is some good stuff going on in here, I think the biggest issue this film has is that it's so dull. It spends way too much time focused on the "politics" of this apocalyptic world and not nearly enough time on the action. Other than the final 20 minutes, I only counted one other action sequence in the entire film, and that's honestly a huge travesty because I'm sure like most people, I thought I was going into an action film, but there was very little action to keep things going. Instead, it's a lot of talk, and when the majority of the film takes place inside a bar, well you have to keep things interesting. But they don't. It was shockingly dull, and a lot of that could have been fixed by simply throwing in either large amounts of unnecessary nudity (which it surprisingly doesn't have), or lots of action. Instead we get lots of talking. 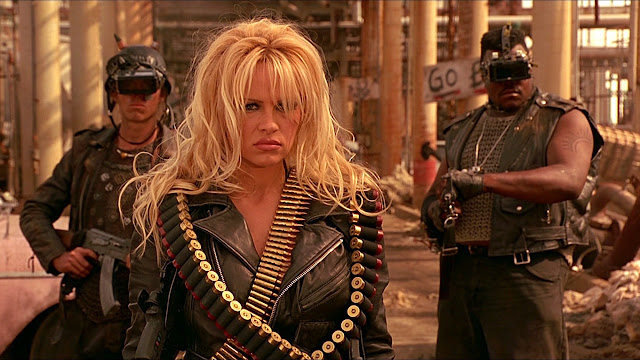 On the plus side, Pamela is actually really great in it. She was made for the role and genuinely gives it her all. David Hogan's direction is mostly solid. I was actually a bit surprised in this area. Typically music video or commercial directors go all out their first time out making a feature film, throwing out every trick they know to impress the hell out of us, the way Michael Bay and David Fincher did when they first burst onto the scene, but Hogan's direction was surprisingly restrained here, even a bit amateurish at times, which was a shame.

Like I mentioned earlier, it has all the right ingredients. It should have been fun. I wasn't expecting it to be great, but I was expecting to be entertained. I was expecting action, unnecessary nudity, and even some camp. Instead, I was incredibly bored. Such a pity. I think what most people will find shocking is that it's co-written by Chuck Pfarrer, who wrote classics such as Hard Target and Darkman. I just don't know what happened here though. I mean, the guy even wrote Virus, which was an absurdly hot mess, but oh so entertaining. I think that's what I was hoping for here. We just didn't get it.

Posted by robotGEEK at 8:48 AM