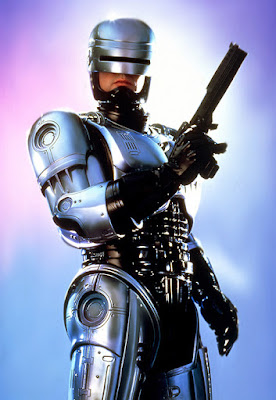 Now this was as total surprise. This is a series I've been wanting to watch for ages, but from what I gather, this particular series has never gotten an official DVD release here in the states (but it is available on DVD in other regions), though the 2001 Mini-Series Prime Directives has. So just a heads up, be sure not to confuse the two.

Released in 1994, Robocop: The Series has a very tumultuous relationship to the franchise fanbase. Let's be honest, most hate it. And believe me, I can understand why. It's a PG rated Robocop series. Did they learn nothing from the previous year's disastrous Robocop 3? Another failed PG attempt that still, despite some pretty cool ideas integrated into the film overall, can't seem to find an audience nearly 30 years later. I hate to admit it, but it will never become a cult classic the way Part 2 is. But I digress.

This series ran for 21 episodes and didn't really find the audience it wanted. Primarily trying to appeal to kids and teenagers, the lack of violence and satire that really drove the first two films is lacking and it just feels...lacking. That's the general consensus because I personally have not watched them, but I'm excited to. But while the show itself wasn't a hit and didn't necessarily generate more fans, it was a pretty decent marketing machine in regards to toys. I will admit, the toys produced because of this series are pretty awesome. So it does have that going for it.

I am one of the biggest Robocop fans there is. I still have vivid memories of going to the movie theater to see Dragnet in 1987 as an 11 year old and seeing the trailer for the first film and just having my mind blown. I hadn't even seen the film yet, but I was immediately obsessed. As I write this article, I am staring at my Robocop poster on the wall next to me, as well as my Robocop VCR Home Game sitting on my desk. I have a lot of Robocop memorabilia and collectibles and have been a die hard fan of the franchise for 34 years. I am one of the very few who genuinely love the 2001 mini-series Prime Directives. Yes its budget is obviously limited, but I'd be damned if that series wasn't badass, filled to the brim with action, violence and satire, it seemed to correct course and fix the issues that this particular series failed to get right. Don't get me wrong though, I am genuinely excited to watch this series. The PG rating doesn't turn me off, as long as it's entertaining.

I watched about 30 minutes of the pilot episode this weekend with my breakfast, and I will say it's not quite HD quality. In fact, it's not really the best DVD quality either. It looks more like the quality of the beginning of the DVD era, and for some reason it's painfully obvious that the picture is "zoomed in" a bit. So just a warning, it's not the best quality. But for a show that is otherwise hard to get your hands on, it's here and it's FREE.

Robocop: The Series (1994) is now streaming for FREE on TubiTV

Posted by robotGEEK at 8:47 AM