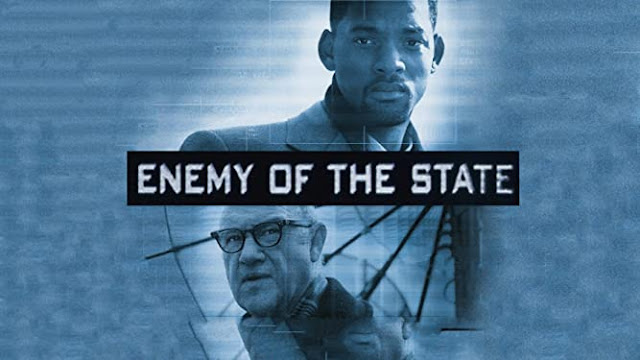 This is One Helluva Thriller!

How the hell have I never seen this before? Enemy of the state is arguably a perfect thriller in every sense of the word. A balls to the walls experience that not only showcases director Tony Scott's brilliance as a filmmaker, but the film delivers in a way that 80% of thrillers try and fail, which just goes back to the fact that I never hear anyone talk about this gem.

While I've always been a HUGE Tony Scott fan, I avoided this one simply because I feared it was similar to his film Spy Game, which I just could not get into. But boy was I wrong. Here Scott delivers a film that quite arguably blew me away. Everything from his amazing visuals, camerawork, cast and insane amount of tension just works masterfully.

Speaking of the cast, holy shit. Literally everyone is in this. I lost count how many times I kept getting surprised by who showed up, even in the smallest roles. It's definitely a fun time just spotting all the famous faces, some who were just newbies then, but have gone onto bigger and great things since. And while Will Smith was great and effective here, I gotta give it to my man Gene Hackman (reteaming with Scott after the amazing Crimson Tide) who once again steals the show in every scene he's in. Here he plays a character that is remarkably similar to one he played many years earlier that have a lot of theorists online debating about whether it's just a coincidence, a homage or that he is in fact the same character. I'll let you judge for yourself though.

Tony Scott would ultimately begin losing some steam in his later films, even drastically changing up his style in films such as Man on Fire and Domino. He would come full circle later with films like Unstoppable and The Taking of Pelham 123 where he would go back to the style that made his films so iconic and identifiable, unlike the quick-edit/shaky-cam headache approach he adopted in the early 2000's, before sadly taking his life. But with Enemy of the State, I can wholeheartedly state that for me personally, this was his last great film of the 90's. RIP

Enemy of the State is one of the best, most intense, stylish and entertaining espionage thrillers I've ever seen, of any decade. Currently streaming on HBO Max and FREE on The Roku Channel.

Posted by robotGEEK at 1:21 PM