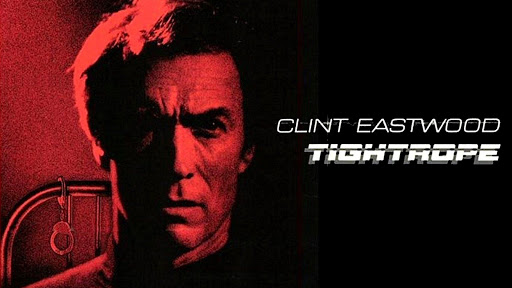 Here's another in a long line of Eastwood flicks I never got around to until now. No real reason really, I guess I just never heard anything about it and when I rely on word of mouth rather than critical response, films like this can slip through the cracks. And it's a shame, since this is easily one of my new favorite Eastwood flicks.

Based in part on the Golden Gate Killer case (which at the time this was made wasn't solved), Tightrope tells the story of a New Orleans cop on the trail of a serial killer and rapist. When the killer starts targeting and taunting Wes Block (Eastwood) and his family, things start getting increasingly dangerous. 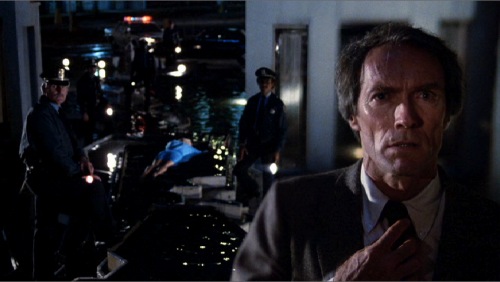 I really and thoroughly enjoyed this one a lot. I'm always weary of thrillers because if they're not handled properly, they can really fall flat, even if the story is strong. In the wrong hands a tight thriller can easily turn into a doldrum drama. But thankfully, writer/director Richard Tuggle (screenwriter of Escape from Alcatraz and director of the underrated 80's thriller Out of Bounds) is up to the challenge and not only does he deliver the goods competently his first time out as a director, but even manages to surpass my expectations at nearly every turn.

At times feeling like a standard cop procedural, and at others like an 80's horror slasher, it's in the craftsmanship that sets this one apart. Eastwood does a fine job as per usual, where he doesn't really seem to have to try anymore at this point. He just always seems like he's naturally playing Harry Callahan no matter what other film he's in. But the film keeps a pace that never gets tedious or dull, and Tuggle's slick visuals often surprised me. The constant jazz score, in keeping with the New Orleans vibe, only adds to the films sleazy undertones and subject matter, making it feel all the more real and uncomfortable. 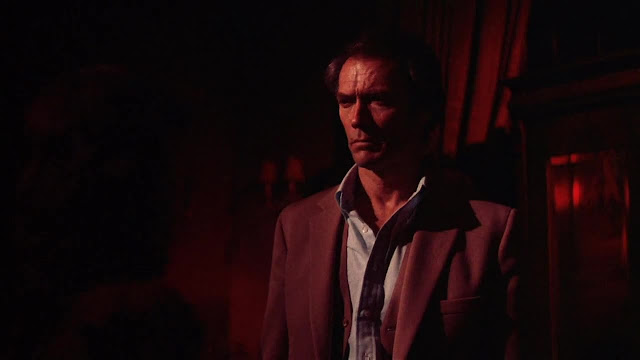 Rumors are that Eastwood would often take over directing duties when Tuggle took too long, which sounds pretty accurate when knowing Eastwood's fast method of filmmaking. He was pretty hands on with Michael Cimino on Thunderbolt & Lightfoot I hear, oftentimes making him only do a few takes and not the many, many that Cimino has been known for. And to be honest, I can feel Eastwood's hand all over this. So much of it "looks" like it was shot by him, because his previous directing effort was the excellent Sudden Impact, and this film looks and feels a lot like that one, which is a good thing.

On a final note, as I mentioned earlier, this story was inspired by the Golden State Killer case, which was still happening at the time this film was made and was known as The Bay Area Rapist at the time. Considering that the case wasn't solved or cracked (that would take a few more decades) at the time, the similarities are strikingly incredible. Even more so when you find out the specifics of the case today and who the Bay Area Rapist/Golden State Killer was. It's crazy and fascinating.

Tightrope is a slight departure for Eastwood, where I can only imagine the subject matter being a bit risque and controversial at the time, and the film is all the better for it. It's easily one of Eastwood's best films and now one of my personal favorite from his filmography. Here he plays a deeply flawed person, who struggles with his own demons and impulses, walking the Tightrope as they say.

Richard Tuggle would only direct one other film after this, the highly underrated and sadly forgotten Out of Bounds in 1986.
Posted by robotGEEK at 12:16 PM