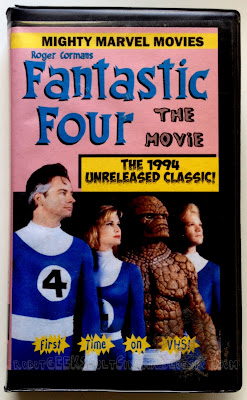 Here's a little project I'm very happy with. I have to admit that on a creative level, I've been on a lull for a very long time. But having taken myself out of the world of Facebook recently, I'm finding that I have a lot more time for more creative endeavors. I wanted to start with something small, so I came up with the idea of doing a custom VHS cover since I'd never actually done one before.

So I had this VHS bootleg of Roger Corman's Unreleased Fantastic Four movie from 1994. I purchased the bootleg from an online vendor years ago, but just judging from the quality of the actual tape, and the horrendous job on the cover art and label for the tape, I'd guess this particular tape has literally been around since the mid 90's. It's easily one of the worst dupes/boot's I've ever come across. On a scale of 1 - 10, I'd probably give this either a 1 or 2. Yes, it's that bad, practically unwatchable. But, when you consider the fact that there wasn't an internet when this bootleg surfaced, or at least the kind we have now, then this was really the only way to watch this remarkable little film. So we didn't complain. It was all we had and the only way we'd ever get to see it.

So I've had this really awful bootleg of a pretty incredible movie sitting on my shelf for a very long time. But I always HATED the cover art that came with it. I hated looking at it. Essentially it just looked like someone used the most primitive program they could find on their computer to put some words above a really terrible and blurry image from the film, then proceeded to make copy after copy of that same image. That's the type of quality we're talking about. I would guess it literally took this person about a whole 5 minutes to come up with it. My guess is that whoever made this was probably selling them at conventions back in the 90's and early 2000's.

Since the first bootleg's started circulating the internet and conventions, this film has become readily available on bootleg DVD's and on numerous streaming sites. So you can pretty much watch it with the snap of your fingers now. But the funny thing is that with all the different bootleg DVD and VHS versions out there, I still never found a cover I actually liked. I considered just downloading one of those cover images and using that, but really, none of them are appealing. They're as boring and uninspired as any of the covers for any new Marvel movie nowaday's. So I just figured making my own will be the only way to go. I had come across a random image similar in style and color online, but it was just the front image, made to look like the cover of a comic book, and wasn't going to work fully for what I needed. So I took a lot of inspiration from that one image and altered it to work for a wrap around VHS cover, taking out certain things I felt unnecessary, and added things I felt were important. 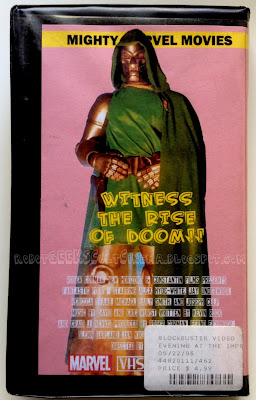 Playing around with different and new fonts was fun, finding the specific FF font wasn't hard at all, easily obtainable from a number of free font sites. I made sure to include Roger Corman's New Concorde logo on the spine considering it's his company that ultimately funded the film. And we all know the story behind that by now, even more so with the release of the documentary Doomed!The Untold Story of Roger Corman's Fantastic Four. I had actually hoped they would have also released it on VHS, but sadly that was not the case.

For the back I know I wanted to include in image of Dr. Doom because he's hands-down the best Doom interpretation out of any FF film, which is both sad and awesome. Sad in that none of the big budget FF films still couldn't get it right, and awesome in that this tiny little ultra-low-budget film did.

When I first put the image on the back, my intention was to make it smaller and throw in a bunch of other images from the movie; standard for any back cover. But when I saw how glorious he looked covering the entire area, I just left it. I think it works.

Since I have a bunch of old empty VHS clamshells laying around, I just used one of those, complete with sticker residue and, as you can see with this back image, still with the old Blockbuster purchase sticker.

Anyway, hope you dig it. It was a fun little experiment, and in any case, this looks a helluva lot better than it did sitting on my shelf before.
Posted by robotGEEK at 2:46 PM