Every so often, I'll finally get off my ass and take a film that's been on my radar for what seems like forever, and actually make the effort to finally see it, only to be absolutely blown away. That's what happened with my experience watching Cast A Deadly Spell.

In the 40's, everyone uses magic to some capacity. And then there's hard-boiled detective Dt. Lovecraft (Fred Ward), who is one of the only people who refuses to use it, making him a unique outsider. When he's hired to retrieve a stolen Necronomicon, he's thrust into the dark world of magic and may have taken on more than he bargained for.

A Made-for-HBO movie (VERY well made) released way back in 1991, and only appearing on HBO, this little gem literally blew us away upon our first ever viewing just a few weeks ago. It was a huge breath of fresh air, and quite the clever little film. It's hard really to describe what kind of film it is, because it successfully marries several different genre's together brilliantly and effectively. It's so successful in fact that I'm kind of shocked that this hasn't been pushed for a wider release. Having only ever appeared on HBO, and subsequently released on VHS (not sure if it was available for sale or if all the copies we come across were meant for home video rentals to video stores) and Laserdisc (I've seen some foreign editions, but have yet to see a U.S. release), it's never gotten an official DVD release to this day, and honestly, that's such a tragedy.

Working with elements of a film noir, horror, comedy, and a hard-edged detective story, Cast A Deadly Spell turns out something totally unique, and it works splendidly. It's just the right amount of funny, horror, action, and thrills that it never strays too far in any of those directions, making it equal parts awesome all around.

On the technical side, a lot of props need to be given to director Martin Campbell. At this point, he hadn't really made a name for himself in the U.S. as a director, as he was mainly working in television over the U.K.. Just a few years later he began working in action films by directing the Bond flick Goldeneye, The Mask of Zorro and No Escape. But he really hit it big when he reignited the stale James Bond franchise by directing Casino Royale in 2006. But then he directed Green Lantern in 2011, and well, it's been hard to bounce back from that huge misfire. But hey, with this film, he does a helluva job with the visual aspect, giving the film a true "noir" look and feel. 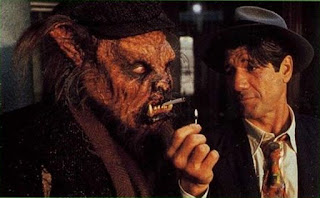 The effects work in this is another area where the film shines. I guess we can all be extremely grateful this was made so long ago, meaning pre-CGI. And thank the heavens for that, because here it's all practical physical and optical effects, and it's glorious. It really adds a huge dash of authenticity to an already nostalgic wonderland of spirited cinema. I can't stress that enough really. With the way films are made these days, Cast a Deadly Spell was such a breath of fresh air; a revelation.

I like to compare it to the John Landis film Innocent Blood, only in the fact that it's such a big mishmash of genre's (genre's you wouldn't normally blend together), yet it works effectively well. I can't think of any other film quite like it to compare it to, except Innocent Blood, which is another surprisingly underrated film that never quite found the audience it deserved.

I hope this get's the official DVD/Blu ray treatment someday. I don't know why it hasn't yet. I've seen other Made-for-HBO films get the official physical release, so I'm surprised that after 25 years, this still has yet to get one. I've also just discovered that there is a sequel to this, titled Witch Hunt, released in 1994, this time with Dennis Hopper in the role of Lovecraft, and directed by legendary screenwriter Paul Schrader (Taxi Driver, Raging Bull). I was only made aware of this recently, so I'll be pretty quick to track that one down soon.

This is such a fantastic little film, full of wonder, creativity, spirit, and awe. If you've never seen it, I urge you to seek this out ASAP. It's highly recommended. And here's hoping to a legit upgrade to DVD or Blu ray someday, in widescreen.

How to see it:
Well, as I stated before, it's never been officially released on DVD, so renting it from Netflix is out of the question. You can find bootleg's all over the place if you know where to look, and the VHS is readily available for a pretty penny. I'm sure it's on YouTube, but can't attest to the quality. I ended up renting it on Amazon Prime (luckily), and it looked great. Crystal clear image and it was even in widescreen.
Posted by robotGEEK at 3:41 PM