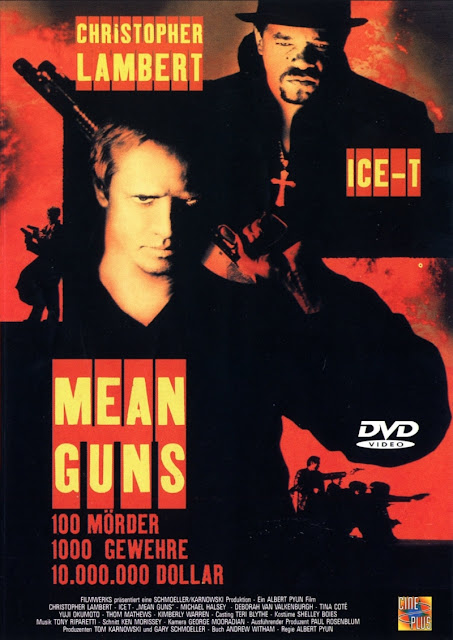 I always feel like I always have to defend Albert Pyun as a director, and it's not always easy. As much as I love the guy as a filmmaker, even I have to admit that I have to question his choices from time to time. While he has a little over 50 titles under his belt as a director, in all honesty, I really only like about a good handful. But it's those handful that I love so much that keep me hoping I'll find more. And I'm still working on it. To date I've only scratched the surface of his entire filmography. So there's always that hope I'll find more of his earlier films that will blow me away the way Cyborg, Nemesis, Captain America, Dollman and Brain Smasher: A Love Story did when I first saw them.

Mean Guns has been on my radar for a very long time. You'd think it would be right up my alley, I mean, with the combo of 90's action, Christopher Lambert, and Pyun behind the directors chair. I should have been all over this long ago. At some point I even picked up a Japan Laserdisc because it was in widescreen, and as far as I know, it's not available in widescreen in any form here in the state, though I'm sure in other parts of the world it's more than likely gotten a blu ray release by now. That's not a big deal for a lot of people, but it's always been for me. I prefer to see certain films in their proper aspect ratio, and I know Pyun has had considerable trouble getting his films released that way. He's even said so. So when I came across a Mean Guns Japan Laserdisc in widescreen one day, I immediately jumped on it.

To my surprise, Mean Guns was better than I expected it to be, but it wasn't awesome. It certainly has some cool things going for it, but overall it's kind of a numbing experience. If there was such a thing as "too much action", then Mean Guns would certainly be the example. It's pretty much a nonstop barrage of guns, shootouts and people dying left and right, but at the same time, it's not very violent. Mainly in the sense that yes you see lots of people getting shot over and over again, but you don't see any blood. But you do see them fall if that counts for anything.

About a good halfway through the film I began to get bored because shocking as it may seem, the endless and uninteresting killing got dull very quickly. To make up for lack of onscreen blood, they instead amp up the gunshot sounds to a ridiculous high, which tends to come off as overindulgent. I don't know, maybe this was their plan all along, but if it was, then they seriously missed a great opportunity to give us a badass action flick. The odd, yet interesting use of mambo music throughout the entire film also adds to the camp factor. It's hard to take a film like this seriously for so many of these reasons. On one hand, it looks slick - everyone is wearing black or in trench coats, and Pyun does a fine job directing this. I wouldn't say it's one of his best efforts, but I've seen worse from him. But on the other hand, it has a weird beat to it, and the constant mambo music takes away a lot of it's edge.

For a film that carries in insane amount of action, I found it to be surprisingly tedious and dull for the most part, which is sad and frustrating because it has so much potential. All the right ingredients are here, but squandered to try a different tactical approach that kind of falls flat. It's not a terrible way to spend an hour and a half of your life, because it does have some positive things going for it, and that might be enough for you to enjoy it. I don't want it to come off like I'm beating this up too much, because it's not a bad film at all. It just could have been so much better with some minor changes.
Posted by robotGEEK at 11:40 AM