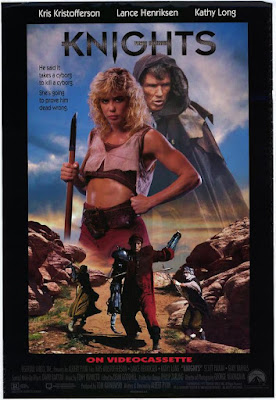 Knights is a film that writer/director Albert Pyun made the year after one of his best films, 1992's Nemesis. It's also the same year he directed Arcade, and another personal favorite of mine, Brain Smasher...A Love Story. As you can see, he's a very busy director. often throwing out about 3 films a year. This particular film though seems to fly under the radar for most of those who genuinely like Pyun's films, or just these type of films in general.

In a post-apacolyptic future, cyborgs rule the earth and it's desert wasteland. A human named Nea (kickboxing champion Kathy Long) teams up with a cyborg named Gabriel (a miscast Kris Kristofferson) to put an end to the cyborg's rule by going after their cyborg leader Job (Lance Henrikesen).

I really enjoyed this one. Knights is a pretty simple straight-forward story, and that's one of it's best assets. Honestly, it couldn't be anymore low-budget than it already is, but because of that, Pyun makes the most of what he's got. He makes full use of the gorgeous desert landscape, offering some pretty killer camerawork, utilizing different colored filters throughout to give certain sequences a little punch. Aesthetically, Knights ends up being one of Pyun's better looking films.

One of the things I was not expecting, but what ended up working in it's favor, is that Knights is so over-indulgent that it ends up being extremely cheesy. There is so much hammy over-acting, and just plain silly dialogue that above all else, it's extremely cheesy. But it works! It works so well in fact that whether intentional or not, this cheesy experience made it so much better than it could have been had they all played it straight. I'm so glad they didn't though, seeing Lance Henrikesen really deliver the kind of over-the-top performance you expect from him half the time made it all the better. I have to really give it to Scott Paulin (The Red Skull from Pyun's Captain America) as one of Job's (Henriksen) henchmen. He made the absolute most of his limited screen time and delivers a truly hilarious/cheesy/hammy performance that easily makes it the most memorable (and hilarious) in the entire film.

The casting of this film is very peculiar. First of all, I don't know what Kris Krisofferson is doing in this. He just seems so out of place entirely. I have nothing against the guy as an actor. In fact, I think he's actually pretty good. But he kind of feels like he fell out of a completely different film or universe and landed smack in this thing. If he's a cyborg, why does he have a southern accent? And watching the fight scenes (he's supposed to be a kickboxer) it's painfully obvious he's not doing any of the actual fighting, save for a closeup here and there. Lance Henriksen was awesome as usual, as was Paulin, but a few other notable surprises for me were very brief appearances by Tim Thomerson (Trancers, Dollman, Near Dark), Vincent Klyn (Cyborg, Point Break), and DTV action star Gary Daniels (too many films to pick). I'm telling you, the casting of this thing is all over the place. Which brings us to the star, kickboxing champion Kathy Long. For her first film, she was not bad at all. She does a fine job playing the part, and when it's time to do some ass-kicking, she delivers the goods.

Ultimately I enjoyed this because of how unintentionally cheesy and silly it was. Had it not been, I doubt it would have been as enjoyable. Pyun again explores his fascination with cyborgs and robots, but this time set in a baron future as opposed to something more futuristic with buildings and flying cars. I'm still not sure why it's called Knights though. It's terribly misleading because there are no actual knights in the film, and that word is never uttered once. There's even poster art showing Kathy Long tightly holding a sword, which gives the impression that this is somehow a mish-mash of cyborgs and knights set in some alternate universe. But she doesn't use a sword at all in the film. So again, the title and marketing are somewhat confusing. But trust me, this is a fun one and worth seeking out.

The film works for the most part. There are a few things that ultimately don't, and some of the fight sequences could have used some fine tuning, but it doesn't take away from the experience enough to ruin it. Kristofferson as one of the main characters, and a cyborg no less, is too bizarre not to notice, but thankfully, it's really Kathy Long's film, and in her first starring role, she carries the film well on her shoulders. Thankfully she's surrounded by a fun supporting cast that kind of divert your attention from time to time.

How to see it:
Never officially released on DVD or Blu ray, you might find it a little hard to find. The VHS pops up periodically, though I've never seen it for less than $10. There are bootleg rips, even some in widescreen somehow, on several online retailers, but being able to stream a legit print has so far not become available.
Posted by robotGEEK at 9:53 AM