Friday the 13th: A New Beginning AKA Part 5 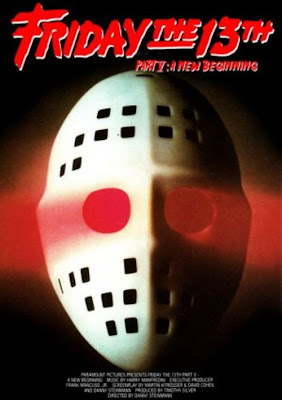 Oh dear lord. I don't even know where to begin with this one. I'll just be brutally honest I guess. This sucked. Probably the worst in the series and now I know why I never felt the need to ever watch it. Well, wait. I never saw Jason X either, so I shouldn't judge yet until I've gotten to that one.Yup, much like a few films I've just seen recently, this is another one that I've never actually gotten around to until now. Even though I have the entire series on DVD, and have seen most of them countless times. Something always kept me from watching this one though.

Uuuuuuhhhh, ok. You know, I love bad movies. I love when a movie is so bad that it actually falls under the "So Bad It's Good" category. Some of my all-time favorites fall under this category. But this, this was just lame on almost every single level. The direction, the kills, the effects, the story and the fact that it's not even about Jason Voorhees. And I could forgive that, if there was some gratuitous nudity and awesome kills. But yea, there's nudity (often times just hilarious rather than enjoyable) and the deaths, kills and effects were amazingly gawd awful and lame. I can't remember the last time I yelled so much at my TV.

A year ago I bought all of these as a set with the intent of watching them in chronological order. But apparently it's taken me almost a whole year just to get to Part 5. Ever since I was young though, I've always regarded Part 4: The Final Chapter as my favorite in the series. It has everything you'd want from a Friday the 13th film and it's done so well. Great kills. Great effects by none other than Tom Savini. Nudity. Gore. A young Corey Feldman and a young Crispin Glover. And tight direction. But I don't know what the hell they were thinking when they decided to continue on with this one even though Part 4 was supposed to be the last one. Obviously when they saw how much Part 4 made, they were seeing dollar signs again. Maybe at the time they thought it was a "fresh" take on the horror genre by offering something different? I don't know. But I just felt constantly annoyed when watching this.

Tommy, who Corey Feldman played in the last one, is now in his 20's and sent to live in a Mental Institute/Half Way House full of other twenty somethings because you know, killing Jason Voorhees can really mess with your head. Even though Tommy killed Jason in the last film, Jason seems to be up to his old tricks again picking off people left and right. Waitresses, paramedics, teenagers, gangsters, whoever. Not just the kids from the Half Way House, but pretty much everybody. And it's the way these scenes are carried out that drive you nuts. You never see the killer..........ever. Not until the very end. Then you think, "Hhhhmmmm, I remember Jason looking bigger". "Why does he look so skinny?". And you rarely see the actual killing either. And when you do, it always seems half-assed. It's immediately made obvious Savini had no hand in the effects this time around. The dialogue is atrocious. The acting, if you can even call it that, is sub-par. And some of the creative decisions in here just make no sense. Thank the heavens that the producers redeemed themselves with Part 6: Jason Lives, which is a true sequel to Part 4 and a much better film than this garbage. I'm sure some will argue that this is an "underrated" film. No, it's just a bad film plain and simple. Director Danny Steinmann never made another film after this, and that's a good thing. As much as I don't care for Steve Miner as a director, I prefer his work in Parts 2 and 3 to this any day of the week.

For a recap on my reviews for the first 4 films in the series and the remake, check out the links below:

Friday the 13th: The Final Chapter AKA Part 4